Big the Cat (ビッグ ・ザ ・キャット) is a character in the Sonic the Hedgehog universe who was introduced in the video game Sonic Adventure.

Big is a simple-minded, 18-year-old purple tabby cat who lives in the jungle surrounding the Mystic Ruins. Though physically strong and imposing of stature, Big is a gentle and easy-going, though somewhat dim-witted, person with a heart of gold. He seems to be a fisher for a living, and he lives in tranquility with his friend/pet, Froggy (Kaeru-kun). Quite frequently, Froggy goes missing, and Big has to set out to find him with his trusty fishing rod. Big is not one for going on grand adventures, preferring his peaceful and quiet lifestyle in the jungle. However, should his friends be in danger or in need of his aid, Big will not hesitate to help out and protect them in any way he can.

The plot of Big's levels in Sonic Adventure was that Froggy was possessed by Chaos' tail. The possessed frog sprouted a tail of his own, stole Big's lucky charm, the yellow Chaos Emerald, and ran away. Big chased after him and eventually wound up on the Egg Carrier. Dr. Eggman gave Froggy to Chaos, both for Chaos' tail and the Chaos Emerald, but Big, with Sonic's help, rescued Froggy. Big took his friend and found the remnants of Tails' crash-landed Tornado II, and managed to fly it home to the jungle.

Big the Cat's gameplay revolves around fishing in bodies of water to catch Froggy, clearing the stage once the amphibian is caught. Besides Froggy, there are plenty of other fish for Big to catch and increase his score, though they are not necessary to complete stages unless the mission requires catching a large-enough fish. Big's gameplay mode is considered by many to be one of the strangest in the game. Simply put, he's the only Sonic character before or since that has had fishing levels, and such inclusion has contributed to the character's unpopularity among critics and fans.

Big appears as a playable character that can be unlocked for Versus Mode in Sonic Shuffle. If he plays a 6 on the board, then he can stop on any space between those 6 spaces. When this happens, he will chase Froggy to the space that the player selected. If Big plays a Special Card in battle, he will use Power Rod. When initiated, he must select another card to attack with, and that card's attack power will be increased by 1.

Big in the 2P Battle mode in the Dreamcast version.

Big is not playable in the main game, but he makes several cameo appearances in Sonic Adventure 2, where he can be found hiding in stages and bosses if the player looks around hard enough, as well as in certain cutscenes. He can also be unlocked as a playable character for the two-player mech-shooting battle, where he humorously replaces Eggman in his Egg Walker and uses Froggy to punch the opposing player.

In the GameCube remake, Sonic Adventure 2: Battle, almost all of Big's cameos were removed from the game, and he was replaced by a Dark Chao Walker in the 2P Battle mode. However, some of his cutscene cameos remain intact, and can still be activated by pressing

repeatedly during certain cutscenes. Many of the missing cameos were restored in the 2012 re-release of Sonic Adventure 2, though Big is still absent from the 2P Battle mode.

Big is the Power Type member of Team Rose in Sonic Heroes. His mission is the same as Sonic Adventure: to rescue Froggy. As Froggy was kidnapped alongside Chocola, the fat cat travels alongside Amy and Cream to save him. His moves in this game include Fire Knock (his equivalent of the Fire Dunk), Big Fishing, Umbrella Descent and Body Press.

Out of all the playable characters in this game, Big is the only one who did not make an appearance in Shadow the Hedgehog.

Just like in Sonic Adventure 2, Big makes numerous cameo appearances throughout the stages of Sonic and the Secret Rings. Although most of Sonic's friends are represented by their Arabian Nights counterparts in Sonic and the Secret Rings, it seems that Big is the only other creature besides Sonic who gets sucked into the book as his classical self. The cat cameos in each level of Sonic and the Secret Rings twice (except Lost Prologue, where he only appears once). To find him, the player is required to halt for a few seconds in a specific location to unlock a short cutscene involving the purple cat. These cutscenes add a new page to the game's Special Book as well.

Throughout the Mario & Sonic at the Olympic Games series, Big has made numerous appearances. In the first game, Big acted as one of the referees. In the second game, Big is a VIP character who the player can meet, and plays a part in the Adventure Tours in the DS version. In the third game, he appears during the story mode in the Nintendo 3DS version. Finally, he appears on the beach amongst other characters from both series in the fifth game.

Big appears as the fourth party member to join Sonic in Sonic Chronicles: The Dark Brotherhood. He still maintains his somewhat slow and dim nature, but is an invaluable ally due to his ability to safely make it through harsh environments with his Invulnerability. He has a side-quest revolving around finding Froggy's friend Norton. In battle, he is in the Support class and has superior strength, but slow speed, being granted only one turn per round.

Big is also a racer in Sonic & Sega All-Stars Racing, where he can be unlocked by spending 7,500 SEGA Miles in the console version, and 40,000 SEGA Miles in the DS and iOS versions. He drives the Green Hopper, a bike which looks like a grasshopper. His All-Star Move, Giant Froggy, involves Froggy becoming huge and trampling over the competition.

In the sequel, Sonic & All-Stars Racing Transformed, Big is relegated to a cameo appearance in Ocean View, where he can be seen fishing behind one of the cliffs that stick out of the water.

Big was a playable Power Type "Easy" character in Sonic Runners who could be unlocked for 150 Red Star Rings or 1,500,000 rings. When playing as Big, game speed would be cut by 10%, but the player's total score would be cut by 20%. Big appeared as one of the party guests who were kidnapped by Eggman during the "Happy Birthday Sonic!" event, and had a role in the "Tropical Coast" event where he fished up something that turned out to be Eggman, having accidentally fallen into the water.

Big returns to Team Rose as the team's Power Type racer in Team Sonic Racing, driving the Frog Cruiser. During the story, Big thinks Dodon Pa is a nice guy straight from the get-go, purely on the basis that he gave everyone cars to race in, and does not understand why every other character is suspicious of the tanuki. He also helps the heroes learn more about Dodon Pa when he points out that he is working with the Wisps, since Wisps only help nice people, and reports having seen Zavok lurking in the shadows, hinting towards the Zeti's eventual appearance.

For completely unknown circumstances, mentioned by Big himself, he appears inside Cyber Space, specifically in places called Fishing Spots. In this game, he acts as a shop owner. He also offers Sonic a chance to fish if the hedgehog has Purple Coins in order to be rewarded with Treasure Tokens to be spent on the shop. 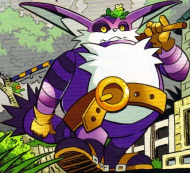 Big and Froggy in the Archie comics.

In the Sonic the Hedgehog comic series and its spin-offs published by Archie Comics, Big was originally a member of the Felidae warriors from the Mysterious Cat Country. Finding his people's customs too complicated and violent, Big chose a quiet life in the jungle with his friend Froggy. At one point, he got involved in the Chaos incident, and a year later he was exiled from his home due to his friendliness towards outsiders. However, he found a new home in New Mobotropolis where he became a member of Team Freedom city defenders.

After the Super Genesis Wave that followed the events of Worlds Collide, Big became a member of the Freedom Fighters, where he served as the team's muscle.

Big has only made a single-panel appearance in the 184th issue of Sonic the Comic when Chaos, drained of power and restored to his original Drakon form, landed in a pond next to Big, who was fishing in those waters, prompting him to notice the creature's arrival.

Big is also a somewhat minor character in Sonic X. At the start of the series, he was apparently caught in the Chaos Control explosion that transported the main characters from their world to Earth, though he would not make any other appearances until a second Chaos Control event brought several locations from their world to Earth. His story is nearly identical to his story in Sonic Adventure. Only this time, he has the help of Chris Thorndyke while searching for Froggy.