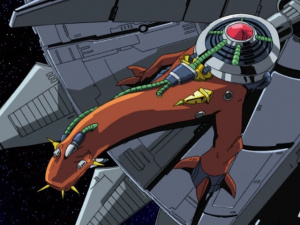 Finalhazard is the last boss of Sonic Adventure 2, formed when Biolizard fuses itself to the outside of the Space Colony ARK. Super Sonic and Super Shadow fly into space to defeat it as the ARK plummets towards the planet.

After the battle, Shadow appears to die as he reverts back to his normal self and catches fire in the atmosphere. In Shadow the Hedgehog, however, it is revealed that he was found and restored to health by Eggman.

Finalhazard is a pretty simple boss. Due to its damaged life support system, it attaches itself to the Eclipse Cannon for power. Though severely weakened it is still a powerful monster. His weakness is the boil looking things that will appear on his body. You must hit the swellings to damage him.

Once you do, He surrounds himself with the 9 egg(3 in a row) It's pretty simple to maneuver around this and hit him.

Maneuver past these, if you get hit by one, you will not be able to move for about 5 seconds.

It should be noted throughout the battle that Tails, Knuckles, Amy, Eggman and Rouge will talk to Sonic and Shadow and mention how much time there is until the ARK's impact with Earth. The background becomes more red as you play. Eventually, if the time passes 5 minutes, you will die instantly, so you are on a time limit.