Honey the Cat is a yellow cat-like character with black hair who appears in Sonic the Fighters, based on Candy from Fighting Vipers (Candy's name in Japan was Honey). However, she was never seen in the Arcade version and remained unused in the game data, never to be discovered until after the release of Sonic Gems Collection.

The Honey that appears in Fighting Vipers has the same poses and look, and even uses a special attack called "Cat Punch". This may have been the inspiration for making her Sonic counterpart a cat.

In Sonic the Fighters 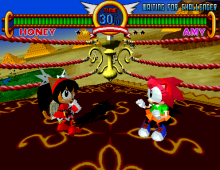 Honey hacked into the Arcade version.

Her in-game data is nearly complete, and has a complete moveset primarily based on Knuckles', allowing players to hack the game's data and play as her in normal gameplay. Her model when squashed by the Piko Piko Hammer reveals she was based on Amy. There is a bug in her eye system, causing one eye to look at the camera but the other to look in the opposite direction, making Honey look strange in some scenes; the cutscene after defeating Metal Sonic does not have this eye problem, though. She does not have any artwork for the pre-level scenes, so it defaults to Eggman. Unlike other characters, when both characters select Honey, there is an actual alternate costume for her instead of a grayscale version. This alternate design was used in a short clip intro for the Sega Saturn version of Fighting Vipers. Honey's model was removed completely from all versions of Sonic Gems Collection.

In the Xbox Live Arcade and PlayStation Network ports of the game released in 2012, Honey has been added as a secret selectable character with what little data that was missing for her added in, including a proper VS. screen image. She can be selected by moving the cursor over Amy and pressing the

button, then selecting her. Doing this also unlocks an achievement/trophy.

In the Sonic the Hedgehog comics published by Archie Comics, Honey made a few cameo appearances, but was soon made into an official character due to an exceedingly huge amount of fan requests, debuting as the founder, CEO, and designer for Honey Brand Clothes and Accessories. During the Shattered World Crisis, she entered the Chaos Emerald Championship as a fighter to promote her brand, much like her human counterpart from Fighting Vipers, and faced off against Sonic, Knuckles, some of the Freedom Fighters and even Team Hooligan (Fang, Bean and Bark).