Bark the Polar Bear (バーク・ザ・ポーラーベアー) is an anthropomorphic yellow/cream polar bear who debuted in the Sega Model 2 arcade game, Sonic the Fighters, released in 1996. Bark is North Island's #1 snowboarder. He is blunt and quiet, but has a gentle heart and loves nature. He is actually a very shy guy.

As was the case with fellow combatant, Bean the Dynamite, Bark appears to have been created specifically with Sonic the Fighters in mind, acting as a large but slow fighter in the absense of pre-existing Sonic characters with similar builds. Bark wears a toque hat and scarf, as well as the obligatory gloves and shoes, and is fought in Aurora Icefield.

Bark is an unlockable in the Sega Saturn game, Fighters Megamix (which brings together a number of Sega AM2-made fighting games, among other novelty characters). He wears a Santa Claus outfit as his alternate player 2 costume.

In Sonic the Fighters, Bark is the third opponent fought by the player as he or she attempts to collect the eight chaos emeralds. His home course is Aurora Icefield and he is the carrier of the yellow emerald. With the exception of Metal Sonic and Eggman which were only made playable in later re-releases of the game, Bark is the heaviest playable fighter, with a selection of slow but powerful attacks, among which include the rotor wheel, twin hammer drive, and one-two wham.

Bark also has a large array of grabbing techniques such as the bark strike, head throw, and the biff-baff. Both the twin hammer drive and bark strike can set Bark up for combination attacks, however the major downfall with the character, is that he is vulnerable every time one of his barriers is broken. Bark can use his chaos emerald to enter hyper mode, with his rotor wheel move acting as as his special hyper technique. This move causes Bark to spin in a similar fashion to how Espio spindashes in the game, driving him straight toward his opponent and even pinning him up against the wall, allowing multiple consecutive hits. It is potentially the most powerful hyper technique in the game.

Bark's personality, motives and history are never detailed in-game, and so his reasons for collecting chaos emeralds and stopping Eggman are not understood.

Bark himself does not appear in Sonic Generations, though his face can be seen on wanted posters shared with Bean all around City Escape, and both of them are wanted for being "armed and potentially dangerous".

Bark, along with Bean and Fang the Sniper, make surprise reappearances in Sonic Mania throughout Mirage Saloon Zone. However, they are not the actual characters, but are illusions created by the Heavy Magician. When the Heavy Magician transforms into Bark, she attacks by pounding the floor to make debris fall on the player. 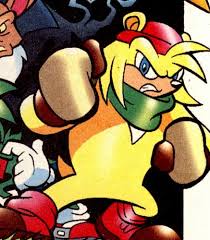 Bark the Polar Bear's appearance in the Archie comics.

In the Archie comics, Bark rarely far away from Bean the Dynamite and often works with both Bean and Nack for money. The three once worked for Mammoth Mogul and tried to get a hold of Sonic's shoes, with or with out Sonic wearing them. After being captured by the Freedom Fighters and imprisoned in the detention center.

Nack, Bean, Bark and other enemies of the Freedom Fighters lie in wait as their lives just waste away, until Mammoth Mogul uses "those who have been marked" to force Sonic to retrieve a chaos emerald for Mogul. Mogul then uses his new power to free everyoneform the detention center. Nack is so pleased that he promises the Mammoth one free job, as Mogul warps both Nack's allies and his own away from Freedom Fighter HQ.

In the Comic "Sol Search", Bark works with Bean and Nack in an attempt to acquire a Sol Emerald, but this ultimately fails due to one of Bean's bombs going off and taking out everyone on Team Hooligan and Team Babylon. Team Rose and Team Dark both emerge victorious, and Bark has to pack away an unconscious Nack to regroup for whatever job that they may take on next. In the comics, Bark is characterized as the strong and silent type. Seldom uttering a word, he doesn't really seem that surprised when things go wrong either.

As with other "forgotten" characters, Bark appears as "armed and dangerous" on a wanted poster in Sonic Generations' depiction of City Escape, with a reward offered for his capture. A model of him is also collectible (as with other Sonic the Fighters characters) in the Sega Dreamcast game, Shenmue and its sequel, Shenmue II.