Illumina (イルミナ) is the guardian entity of Maginaryworld, where the dreams of beings from all other dimensions take form. Her duty as the Goddess of Dreams is to protect the Precioustone, an object which created and continually supports Maginaryworld's existence. She has a warm and mysterious smile, filling the hearts of listeners with joy and warmth with her words and the music from her harp.Media:SonicShuffle DC US manual.pdf[1] 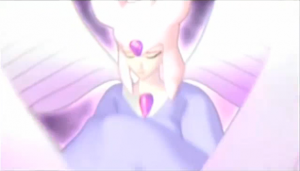 Illumina's appearance during Sonic Shuffle's opening cinematic, shortly before she splits into her two personas.

At one point in her duty, she became overcome with self-doubt and lost sight of her dreams, which caused an internal conflict so strong that she split into two beings, each representing opposite ends of the spectrum of emotion. Lumina Flowlight represented the positive aspects of dreams, while Void represented the negative. Neither of them could recall their time spent together in the form of Illumina, which caused Lumina to believe she was a subordinate of the goddess and that Void had caused her to mysteriously vanish.

With no positive emotions of his own, Void decided that annihilation of Maginaryworld was what he should work towards. To do this, he shattered the Precioustone and scattered its fragments to the various worlds of the dimension. This is what led Lumina to call out to other worlds for help, bringing Sonic, Tails, Amy and Knuckles (plus Eggman, accidentally) into Maginaryworld to help recover the fragments.

The revelation that Void and Lumina were the separate halves of Illumina comes at the end of Sonic Shuffle, a fact which Lumina rejects. After Sonic and co. battle with and subdue Void's monstrous form, he is converted into a transparent black gem. Lumina is lost in self-doubt and questions whether her actions were the right thing to do, but she is brought to her senses after a pep talk about the balance between positive and negative emotion being necessary for people to create and attain their dreams. She takes the gem and enters the reformed Precioustone, which causes a merging of the two personas and recreates the form of Illumina. She thanks Sonic's group for clearing away her doubts and swears that Maginaryworld will become an even grander place for dreams, before safely sending them back home.

In Japanese, Illumina is voiced by Yūko Minaguchi, whereas her English voice is provided by Elara Distler, the same as her positive half Lumina.