Tikal (ティカル) is a female echidna spirit who had disappeared 3,000 years ago and was the princess of an ancient tribe of echidnas known as the Knuckles Clan. She debuted in Sonic Adventure as a non-playable character where she played a central role. Appearing as a small ball of light in each stage she would offer help and advice, and would give the main characters visions of her past in an effort to prevent Chaos from destroying the world. 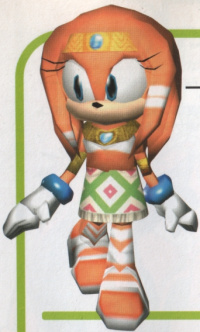 Fast forward 3000 years. The last remaining survivor of the echidna race had been sitting before the emerald alter in contemplation. In a flash Dr. Eggman, having heard of the old legend, appeared and shattered the massive gemstone, freeing Chaos its imprisonment. Unintentionally, a ball of light also shot forth from the broken shards.