For the level in Sonic X for the Leapster, see Station Square (Sonic X).

Station Square is the city that serves as the first Adventure Field in Sonic Adventure and its rereleases, where a great deal of the game takes place. Station Square also appears prominently in Sonic X, and can be visited in Sonic Chronicles: The Dark Brotherhood. 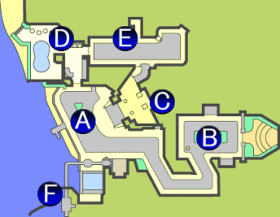 Station Square is famous for its many attractions, including its amusement park called Twinkle Park, a casino called Casinopolis, a hotel, a bustling downtown shopping centre and a front-row view to the ocean. It's also where the SS Train Station is located, with a free train ride to the Mystic Ruins. In the DX and 2010 versions, Cream the Rabbit can be found flying around the city at a specific point in each character's story.

At the end of Sonic Adventure, most of Station Square is obliterated in a massive tidal wave summoned by Perfect Chaos, and presumably, most of its human inhabitants are killed. The tumble-down shanty-town that the survivors cobble together is seen as part of Blue Ridge Zone in Sonic Chronicles.

In Sonic Chronicles: The Dark Brotherhood, the heroes use the Tornado to fly to Blue Ridge Zone; an azure, mountainous region which lies on the approach to Metropolis. Their landing strip is in a distinctly impoverished-looking Station Square, its skyscrapers replaced by 2-storey houses that appear to be made out of scrap metal.

In Sonic Generations, Sonic is thrown back in time to face various challenges from his past. One of these is a recreation of the fight against Perfect Chaos, taking place once again within the ruined, flooded husk of Station Square. Another one of the challenges is to cross the familiar highways, skyscrapers and buildings of the city on Speed Highway

A glimpse of the city can seen during a sequence of flashbacks in Chaos Island as Sonic retells Tails' previous accomplishment on saving Station Square.

In issue #80 of the Arche Comics Sonic the Hedgehog comic book series, which is the second part of the official Sonic Adventure tie-in story arc, Sonic and the Freedom Fighters travel with Nate Morgan to reach what is referred to as the "Hidden City of the Ancients", after intercepting a message to Dr. Robotnik in the previous issue referencing said place, with intention of making contact and saving a population of "ancient Overlanders" from Robotnik's impeding threats. The city, a bustling metropolis hidden under a large mountain, is called Station Square by its locals, a society of humans that are technologically advanced only as far as the late 21st century, considered ancient by contemporary Mobian standards. Even after the end of the Sonic Adventure tie-in story arc, Station Square remains a reoccurring setting throughout the comic book series. 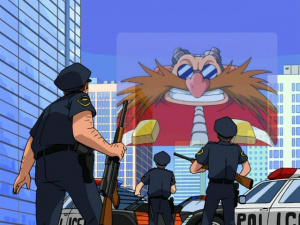