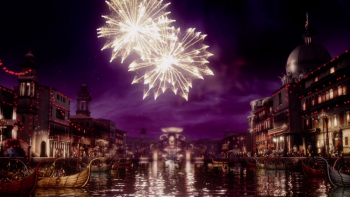 Soleanna is a fictional city in the Sonic the Hedgehog series. It made its debut appearance in Sonic the Hedgehog, which was released for the Xbox 360 and PlayStation 3 in 2006. Soleanna is also known as the City of Water, as the whole city is interspersed with canals. Much of the city's architecture revolves around water too, with numerous bridges and fountains plazas scattered about Soleanna. There is an assumed inspiration from the city of Venice in the city's design within the game, as there are no roads or cars in the Castle Town, but canals and buildings rising up from the coastline.

Soleanna is an important cultural center, filled with temples, theaters and fine cuisines that the locals take much pride in. The city has kept its traditions alive throughout the centuries, though little is known of its origins. Soleanna benefits from a monarchy, with the current ruler of the city being Princess Elise III.

Soleanna appears to be somewhat happy and peaceful. Many citizens state that Soleanna has always been this way and that this is their chief reason for staying here. There's a strong appreciation for the city's many state ceremonies. The most famous of these is the Festival of the Sun, which sees the ceremonial torches in Soleanna's lake set alight. It is during this festival that the city came under attack by Dr. Eggman's forces.

It is implied that in the possible future after the Day of Disaster, the hellish Crisis City - Silver the Hedgehog's home - is Soleanna's eventual fate. The time paradox at the end of Sonic '06 averts this decidedly unpleasant eventuality.

The older portion of the city of Soleanna, Castle Town oddly does not contain a castle; the royal residence in fact lies on its own tiny island offshore, and, although viewable from the shore, is never visited by player-characters in-game (although Elise is shown inside during some of the cutscenes). Castle Town includes wide open plazas, elaborate fountains and bridges, and cafes and boutiques all over the place.

As Soleanna's business district, the New City has a much more modern, city-like feel, with wide (ableit car-less) roads, towering skyscrapers, and port facility with industrial docks and warehouses. The area hosts the headquarters of the Rimlight corporation, as well as the city's marina and train station.

Outside the city, open grassland and rocky bluffs give way to dense woodland - a section in which it is particularly easy to get lost.

Soleanna, being a cultural center, is the holder of numerous celebrities. The most famous event is known as the "Soleanna Sun Festival". The sun has been always sacred in the city, it is an important part of the culture of Soleanna, and the citizens give thanks for the star by honouring the traditional sun god, Solaris. The festival is being held at night, but all buildings and towers are well lighted and may fireworks are launched, adding a special mood to the event. Although all of the people pray to the sun, the most important actions come from the current ruler of Soleanna. He or she has the opportunity to travel through the rivers of Soleanna on a wonderful boat, while dancers dance behind the ruler in yellow dresses, making a reference to the sunlight. After the ruler travelled through the city, the boat heads for the "Altar of Light" also known as the "Altar of Flame". This altar takes place in the downtown of Soleanna, in a central place. When the current ruler arrived, he or she is greeted by the bishop, then he or she is given a torch. The ruler is supposed to light up the altar with the torch, saying the following line:

''"We give thanks for the blessed flames. May we always continue to have peace. Sun of Soleanna, guide and watch over us with your eternal light".

The altar lights up, and the fireworks are launched.

Soleanna is the holder of the Apple festival too, although it isn't as famous as the Sun Festival. The city isn't as well-decorated, but the people enjoy this happy event, as the quality of the Soleannan apples are world-famous.

The Duke of Soleanna was the wise, calm leader of Soleanna, before his daughter, Princess Elise took his place. Despite being a king, he was a brilliant scientist. He had a really strong relation to his daughter. Before he died, he begged Elise to never cry.

Princess Elise is the current leader of the city. When she was seven years old, she was with her father, the Duke of Soleanna, when he tried to extract energy from the sun god of Soleanna, Solaris. The experiment accidentally splits the deity in two entities, but the Duke manages to transfer one half, Iblis, into Elise. He then tells her that she must never cry, as that would release the destructive Iblis, also known as the "Flames of Disaster".