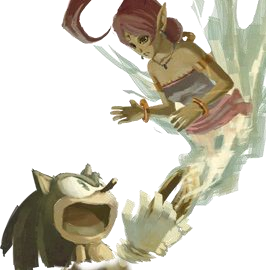 Sonic shows understandable surprise when works of fiction begin talking to him.

In the Sonic games (specificly Sonic and the Secret Rings), the Arabian Nights is a fictional story within the fictional Sonic story itself; but nevertheless, Sonic still ends up adventuring there. After falling asleep while reading the book in the opening cutscene of Secret Rings, Sonic is contacted by Shahra, the Genie of the Ring, asking for the "Legendary Blue Hedgehog"'s help.

Erazor Djinn is running rampant within the storybook world, obliterating the tales of Arabian Nights and intending to break out into the real world. The Blue Blur agrees to help out, and Shahra transports them both into the world of the book. Areas visited by Sonic within the Arabian Nights include: