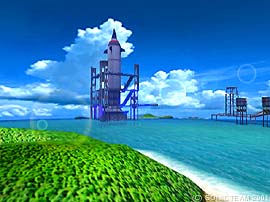 Prison Island is a military base of the Guardian Units of Nations, functioning as an important plot location in Sonic Adventure 2 and revisited in Shadow the Hedgehog. It is here that Professor Gerald Robotnik was imprisoned and eventually executed after the shutdown of Project Shadow, and also where Shadow himself was held in cryostasis for 50 years until his release by Dr. Eggman. Multiple stages are set on Prison Island; in SA2: Prison Lane, Metal Harbor, Green Forest, Iron Gate, Weapons Bed, Security Hall, and White Jungle; in Shadow the Hedgehog: a single stage actually called "Prison Island".

The isle lies in the United Federation, off the coast near Sonic Adventure 2's main city (which may or may not be Central City). Its design was supposedly inspired by Alcatraz, a real-life prison island off the coast of San Fransisco.

Prison Island has been an important G.U.N. military base for at least 50 years, housing fighter jets, ballistic missile platforms, and all manner of weapons and armour. It also serves (appropriately enough given the name) as a maximum-security jail, and Area-51-style storage facility for things the military really doesn't want falling into the wrong hands.

...But fall into the wrong hands they do, right at the start of Sonic Adventure 2. The full might of G.U.N. security protocols is no match for Dr. Eggman, as he blasts his way into the base at Iron Gate to retrieve a superweapon mentioned in his grandfather's records. Said superweapon turns out to be Shadow the Hedgehog, who tells Eggman to rendezvous with him later on the Space Colony ARK before sprinting off to get his hands on the Chaos Emeralds.

Shadow's thievery combined with a case of mistaken identity leads G.U.N. to capture and imprison Sonic the Hedgehog on Prison Island (morbidly, in the exact same cell Gerald was killed in). Tails and Amy blast their way through Prison Lane to rescue him. By coincidence, Eggman and Shadow (plus Rouge the Bat) come back to Prison Island to steal G.U.N.'s Chaos Emeralds from Security Hall, leading the two teams to fight each other and the military through Weapons Bed, Metal Harbor, Green Forest and White Jungle. Both teams evacuate the island just in time before Eggman's time bombs go off, decimating the entire base. 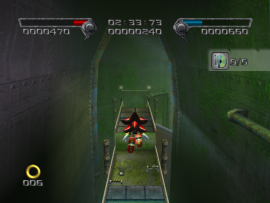 Prison Island has seen better days in Shadow the Hedgehog.

Chaos Controlling all over the place during the Black Arms invasion of Sonic's world, an amnesic Shadow returns to Prison Island in search of the white Chaos Emerald. Only after arriving does he recall the place had any previous significance to him, with brief flashbacks triggered to his release from cryostasis.

Prison Island has gone vastly downhill after Eggman's terrorism. While G.U.N. still maintains a presence there, they now share the island with free-flowing rivers of glowing radioactive sludge and rampant jungle overgrowth of the once-mighty military prisons. In fact, there are only mechs in this level, with no actual human soldiers at all, implying that the island is now pretty much uninhabitable. A few Black Arms have been captured and interred, but others run free and are fighting the robots. Shadow can either help the aliens wipe out the defenders, run straight for the Chaos Emerald, or assist Charmy Bee, who - on Vector's orders - is exploiting the confusion to steal top secret military information for Team Chaotix's morally dubious detective work.