Project Shadow was a medical research programme conducted by the United Federation fifty years before the main events of the Sonic games. It produced both Biolizard and Shadow the Hedgehog, as well as indirectly causing the deaths of Gerald and Maria Robotnik. The Project's legacy forms the basis for the storyline of Sonic Adventure 2, and, to a lesser extent, Shadow the Hedgehog.

Initially conceived by the then-President of the United Federation as a means of researching immortality, Project Shadow was thusly named so as to remind the researchers of the need for absolute secrecy in their work. Professor Gerald Robotnik, "one of the most brilliant minds of all time", was assigned as the project leader. Despite his initial reluctance in conducting science of this nature (claiming that it "crossed Man's limits"), Robotnik realised he might be able to co-opt the research in order to find a cure for Neuro Immunodeficiency Syndrome, a fatal disease afflicting his granddaughter, Maria. 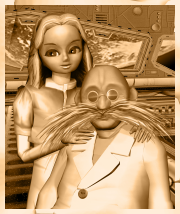 Gerald and Maria Robotnik, during their time on the ARK.

As the Project progressed on the Space Colony ARK, Gerald made contact with an alien life-form called Black Doom. The leader of the Black Arms race, Doom assisted Gerald with his research, going so far as to provide genetic material for the Project in the form of his blood. Gerald also studied the Chaos Emeralds, producing Chaos Drives to act as a means of supplying infinite energy to living tissue. The Project produced Biolizard, a creature containing many of the desired traits: regeneration, restoration, self-reproduction... however, it required a life support machine to remain viable.

Gerald's fantastic (though incomplete) successes prompted fear in the military heirachy of G.U.N., however. The Biolizard proved difficult to control, and the army leaders, distrustful of Project Shadow as a whole, conspired to shut the research down. G.U.N. manufactured a purported biohazard catastrophe on the space colony, using this as a premise to evacuate the ARK's population and kill anyone involved in Project Shadow, aside from Gerald himself, whom they would use as a scapegoat for the "accident". Shadow the Hedgehog, Project Shadow's latest live product, was ejected to the planet by Maria during the invasion, but was later captured and sealed away by G.U.N. forces.

In Shadow the Hedgehog, it is revealed (unsurprisingly) that Black Doom had his own, non-humanitarian agenda in contributing to Project Shadow. While the President wanted immortality and Gerald wanted a cure for NIDS, Black Doom intended the programme to produce an agent who would gather the Chaos Emeralds for him on the Black Comet's return to the inner solar system, 50 years later. In this, Doom is actually the only one to get what he wanted from Project Shadow - although it backfires spectacularly on him, in that Shadow, despite delivering the Emeralds, goes on to become Super Shadow and defeat Devil Doom, while the ARK's Eclipse Cannon obliterates the Black Comet entirely.