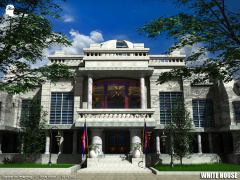 The United Federation presidential palace as seen in Shadow the Hedgehog. 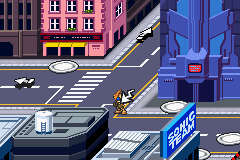 The capital, Central City, as seen in Sonic Battle.

The United Federation is effectively the U.S.A. of Sonic's world. Populated by humans, the Federation is led by a President who works from a building highly reminiscant of the American White House. G.U.N. appears to function as the Federation's military.

It is worth noting that the United Federation doesn't appear to be a 'World State'; in Sonic the Hedgehog (2006), Soleanna is strongly implied to be a wholly independent nation with its own monarchy. G.U.N. dosn't seem in too much of a rush to help the inhabitants of Monopole during Sonic Riders: Zero Gravity either.

The Space Colony ARK was also a United Federation project until it was shut down fifty years ago, though it now lies abandoned and inhabited by nothing but Artificial Chaos.