Mystic Ruins is a jungle area which features as the second Adventure Field in Sonic Adventure. Like the other two, it is comprised of three distinct areas and a Chao Garden. Many of the characters' later levels are accessed from this area. 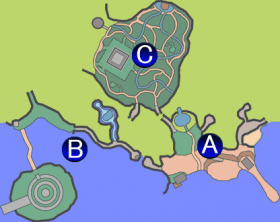 Map of the Mystic Ruins, an Adventure Field in Sonic Adventure.

In the game, a group of archaeologists are sent to seek out the ancient Echidna Temple, although it is revealed by talking to one of the group that the first group sent into the jungle have become lost, and plans are being made to send in a second team.