Emerald Coast is the first Action Stage in Sonic Adventure. Most Sonic games start with a Green Hill style stage, but SA instead starts with this run along the beach near the Station Square Hotel. The beach is rendered in great detail, from footprints visible in the sand all the way down to a very realistic looking lens flare from the sunlight above. This stage is well known for the large orca that chases Sonic down across a series of platforms.

Sonic the Hedgehog is the first character to go through this stage on a mission to rescue Tails, who has crashed here while testing out a Tornado II prototype. Big the Cat comes here later to search for Froggy, which unfortunately coincides with E-102 γ's search for the same frog. 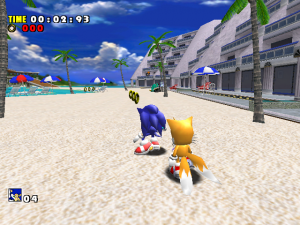 The first part of Sonic's stage. E-102 gets a slightly altered version of this section for his stage; he starts at the same location as Sonic but ends at his second launch panel. The Orca appears in this area for Sonic near the end of the map. When the Reebok mini-game is active, billboards with the Reebok logo appear in this area and Sonic must track down 5 pairs of shoes. 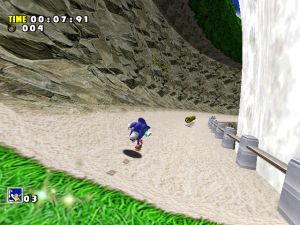 This area features a run behind some ledges and waterfalls. Found underneath some platforms in a small pool is an Air Bubble, the only one in the game accessible to Sonic. This is the first area the player can find Jump Panels, which reappear in many of Sonic's later stages. Tails (replaced by a capsule on subsequent revisits) can be found at the end of this area, marking the end of Sonic's stage. This area is inaccessible if the Reebok mini-game is active, as the entrance is blocked by a billboard.

The intro to Windy and Ripply is an arrangement of "Boss 1" from the Mega Drive version of Sonic 3D: Flickies' Island. 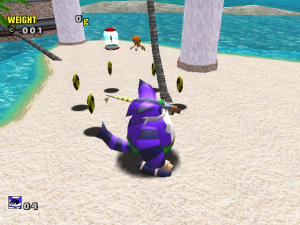 The area at the end of Act 1, modified to suit Big's gameplay style by filling in the nearby ocean with areas for fishing. It has an additional fishing pool that can be accessed through a small island added behind the main area.