Hot Shelter is an Action Stage in Sonic Adventure that takes place in the vast interior of the Egg Carrier. This level is unique to the game in that none of the three main characters—Sonic (making it the only non-subgame level he does not have access to), Tails or Knuckles—play it, instead being accessible only by Amy Rose, Big the Cat and E-102 Gamma. This level is the longest one in the game, with an A-rank time limit set of 6 minutes 30 seconds for Amy (though it can be completed in less).

It appears to have a TARDIS-like quality in that it perhaps suggests a larger size than the Egg Carrier's exterior (perhaps even forgetting things such as the engines) would hold. It is the inside to Sky Deck's outside, which it is somewhat opposite to, as none of the characters that visit Hot Shelter visit Sky Deck, and vice-versa.

Story-wise, Amy is trying to find a way out after being set free by Gamma, while Big is searching the aquarium for Froggy. After the Egg Carrier crashes into the sea, Gamma comes here to locate and destroy E-105 ζ. 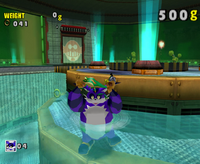 This first part of the stage is accessible to Big and Amy which goes from an elevator ride into a long corridor with several doors blocking swift passage for Amy, which must be opened by way of a crank turned by grabbing it with the action button and rotating the control stick (though for Big they open automatically). These halls, lined with several tanks of water, contain fish when playing as Big. The hall leads into a large open area with a drainage switch, which is where Froggy can be found for Big. Big can find a secret passage to an area above that room that will lead to another drain plug, which will drain more water, leading him to the tanks seen previously.

Amy continues from here to two additional halls with stairs, that lead into the next section. 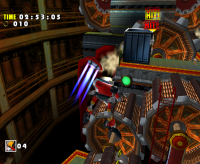 The second part of the stage has areas open to Amy and E-102. Though Amy takes a duct from the previous area into a bathroom, E-102 takes an elevator down to the hall it leads into. Both paths cross an area with several large gears rotating above an open pit, into an open area with a track switcher, where their paths split. Amy enters an area where Zero re-appears, and must pass through two sections where she puts colored blocks into corresponding passages to open areas to continue. After this her stage ends as she finds the balloon. E-102's area leads to a high-speed train section; at the end of this is a fall that goes to his battle of the stage against E-105 Zeta, who has expanded to the size of a large room, presumably after rebuilding himself.

Surrounding E-105 is a rotating platform, making it harder to control E-102. To defeat E-105, the cannons mounted around his body must each be destroyed. Each cannon constantly fires bullets that home in on E-102.