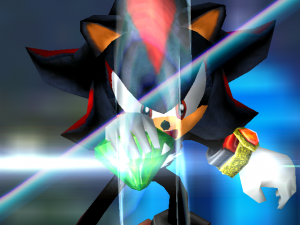 Chaos Control is an ability that uses the Chaos Emeralds to warp time and space. Since its first introduction in Sonic Adventure 2 as simple teleportation trick for Shadow the Hedgehog, the it has evolved into something of a catch-all term for any supranatural manipulation of reality conducted through the power of the Emeralds. Chaos Control powers energy based attacks such as Chaos Spear and Chaos Blast, and can even allow travel through time and between dimensions.

It is not necessary to be in physical possession of a Chaos Emerald to induce Chaos Control as the power of the Emeralds can be harnessed within a certain proximity. Furthermore the power of Chaos Control is amplified with every Emerald in the user's possession, until reaching full power with all seven.

Five characters are confirmed to have the ability to use Chaos Control:

Dr. Eggman also harnesses the power of the Emeralds using machines, with his splitting of the world in Sonic Advance 3 specifically referred to in the manual as Chaos Control.Media:SonicAdvance3 GBA US manual.pdf[1] Also, in Sonic and the Black Knight, Shadow's Arthurian counterpart Sir Lancelot uses a Soul Surge which is very similar to Chaos Control, although no Emeralds seem to exist in the Grand Kingdom. Knuckles and Tikal's manipulation of the Master Emerald may be analogous to Chaos Control, as might Blaze's abilities using the Sol Emeralds. 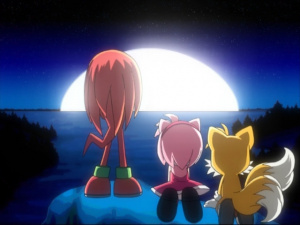 The interdimensional Chaos Control explosion in Enter the Supersonic Hero!

Chaos Control was first used in Sonic Adventure 2, with five instances in that game. The first was during Shadow's meeting with Sonic (where the Ultimate Lifeform used it twice). The second time was to (very reluctantly) save Rouge the Bat from the Prison Island base, and the third was when Sonic used Chaos Control to escape from the falling capsule. Fourth was in Sonic and Shadow's final duel, and fifth was to save the world from the collision of Finalhazard and the Space Colony ARK.

In subsequent games, Shadow's repertoire of chaos-based techniques expanded significantly. In Heroes he has Chaos Inferno; in Sonic Battle and Sonic Chronicles, all of Shadow's attacks involve Chaos Control in some form or another; and in Shadow the Hedgehog and Sonic '06, Super Shadow uses supercharged Chaos Spears to eliminate both final bosses.

In Sonic X, an accident with one of Eggman's machines induces a vast Chaos Control explosion, which initially teleports Sonic and his friends to a modern equivalent of Earth. Later in the series it also transports Angel Island and other lifeforms from Sonic's world to Chris Thorndyke's planet.

Hero technique in Shadow the Hedgehog

In Shadow the Hedgehog, Shadow can charge up either a "Hero" meter by (by defeating the villainous Black Arms and sometimes Eggman's robots) or a "Dark" meter (by attacking the good guys, GUN). A full Dark meter enables Chaos Blast; a full Hero meter enables a move simply called Chaos Control. In this context, Chaos Control allows Shadow to automatically fly through the level until the ability is canceled or the Hero meter is emptied; very much like the original Adventure 2 slow-time teleportation. Using this skill is actually required to progress through the level in some sections of The Last Way.

In contrast Chaos Blast (charged by destroying scenery, attacking G.U.N. troops, and destroying Eggman's robots in levels where he is the Hero ally) sees Shadow sends out a sphere of energy in all directions, destroying every NPC and small scenery element caught in the vicinity.