Blaze the Cat (ブレイズ・ザ・キャット) is a fictional anthropomorphic cat in the Sonic the Hedgehog universe. Originating from the Sol Dimension, she made her debut in the Nintendo DS video game Sonic Rush in 2005 and has been a recurring character ever since.

During early production[3] of Sonic Rush, the documentation featured the silhouette of a character who would soon become Blaze, detailed with a feminine and feline aspect as well as a jewel on her chest, elements kept for the final version. According to Kevin Eva, Sega Europe Community Manager at the time, this concept art was said to be done in early 2005, presented inside PowerPoint documents that contained planned features for the game.[4]. 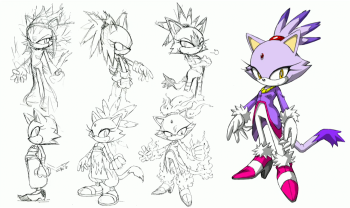 Blaze was designed to be the equivalent of Sonic from an alternate dimension[5], as far as even having a different set of emeralds to collect. While various designs with distinct clothing or details like hair, eyes and fur were presented throughout her conception as indicated by an undated concept art, many aspects were carried to her final design such as her ponytail and dress.

Among the conceptualized designs there is one picturing Blaze dressed in a cape by artist Yuji Uekawa, a characteristic also mentioned on Blaze's description in an early script draft[6][7] for Sonic the Hedgehog, mentioning that she typically wears the cape to hide her flames. However, it is uncertain if the concept art is connected to Sonic '06's script draft in any way despite the semblance between them.

In SEGA's Sonic '06 game script draft spreadsheet file[7], there are character profiles written in corresponding English and Japanese that talk of their personalities and some of their origins. It says in the end of Blaze's English profile, "She has a rather unique costume on under her cape, and it also seems that she is bothered by underendowed [sic] chest (comments on which will rouse her anger)." Since this doesn't come from the final script, it's possible that this was changed in later revisions.

Blaze is introduced in Sonic Rush as the imperial princess of the Sol Empire[8][9] in another dimension, where she acts as a defender of the Sol Emeralds. As her name implies, Blaze's main ability is pyrokinesis; the ability to control fire. Though she is alone in Sonic's world and painfully shy when meeting strangers, she will not let this prevent her from fulfilling her mission: to retrieve the Sol Emeralds and save her world from destruction. Her dimension and Sonic's are in flux with each other, allowing the characters to travel from one to the other through a tear in the space-time continuum. Blaze is the only playable character aside from Sonic himself, available after Sonic beats Dr. Eggman in the Leaf Storm Zone.

Throughout the game, Blaze learns the meaning of friendship from Sonic and friends, especially Cream the Rabbit. Cream opens her up to the world and teaches her the value of friendship: the two become close partners like Sonic and Miles "Tails" Prower, similarly to how Tails values Sonic as an older brother and hero, Cream similarly learns to idolize Blaze, if not more in a friendly way.

It is through the power of friendship that Blaze realizes the true powers of the Sol Emeralds, and she transforms into her Super State, Burning Blaze to help Super Sonic stop Eggman and Eggman Nega from taking over the universe. After Super Sonic and Burning Blaze defeat them, they promise to see each other again and say their goodbyes as they shake hands, being torn apart by their respectful dimensions being returned to normal. Blaze, still in a Super State, now understands her power and friendship, as she thinks on Sonic's words of advice.

In Sonic Rush Adventure, Blaze faces a new threat to her world in the form of Captain Whisker, a robotic pirate and leader of a band of pirates who are causing chaos and havoc across the high seas of the Sol Dimension and steal an ancient artifact called the Jeweled Scepter which is said to have the power to control the world's geological activities and is also under protection of Blaze's royal family for generations. Failing her duty, Blaze embarks on a new adventure to purse the pirates and recover the artifact along with past partners Sonic and Tails and a new companion, Marine the Raccoon.

At first, the feline princess considers Marine a nuisance, leaving the raccoon girl behind during missions in dislike and being harsh on her. However, throughout the game Blaze learns to respect Marine by the time the girl finds her the stolen Jeweled Scepter, even thanking her for this contribution, realizing then how wrong she was about Marine.

With the support of her allies, Blaze collects the Sol Emeralds and defeats the pirates, but unfortunately for her Eggman and her own rival Eggman Nega manage to steal the scepter once they reveal themselves as the creators of the pirate crew, working together to unleash the Power of the Stars. In parallel to them, Blaze teams up with Sonic, achieving their Super States to halt the doctors' plans. At the verge of defeat, however, the Egg Wizard at Eggman Nega's command prepares to fire a "Planet-Buster Laser" which is fortunately stopped by Marine, giving Super Sonic and Burning Blaze the opportunity to deliver a double-teamed coup de grâce.

At the end, Blaze and Sonic shake hands once again as a symbol of their partnership, promising to meet him again one day. Once Sonic and Tails travel back to their dimension, she comforts Marine about their departure, staring at the sky in hopes of seeing them again.

Blaze's later appeared in the sequel to Sonic Rush, Sonic Rush Adventure, again as a playable character. It's noteworthy that in this game, Blaze is shown as invulnerable to fire hazards. She has appeared as an amigo character in Sonic the Hedgehog and in Sonic Riders: Zero Gravity as an unlockable racer. She also makes an appearance as a playable athlete in Mario & Sonic at the Olympic Games and its sequel.

In the IDW Comic Series, Blaze the Cat was sent to Sonic's dimension after receiving a warning from the Sol Emeralds. She arrived after Dr. Eggman's attempt to take over the world but believed there may have been another coming crisis. She joined up with Sonic's friends to help battle Neo Metal Sonic, who had taken over the Eggman Empire in his creator's absence. After the big brawl on Angle Island with Neo Metal, Blaze returned to the Sol Dimension to resume her duties as princess of the Sol Empire. She later saw Sonic again after he was blasted to the Sol Dimension by the Warp Topaz. Sonic had lost his memories but with Blaze's help he was able to get his head straights and go back to his world.