Void (ヴォイド Voido) is the main antagonist in Sonic Shuffle. He is one half of Maginaryworld's ruler, Illumina, and represents the negative feelings which give people the ability to dream; whereas Lumina Flowlight is the other half. Following his creation, Void sought the Precioustone to become whole, nearly dooming Maginaryworld in the process. Unaware of this at first, Sonic and his friends set out to defeat him, but when he expresses his feelings of loneliness they decide to try and help him.

Void is described by the game's manualMedia:SonicShuffle DC US manual.pdf[1] to be a boy with a far away look in his eyes and shows no emotion at all. At times, he speaks as if talking to himself and expresses his deep feelings, which have a sense of sadness to them. He is unique among other rogues in the Sonic series in that his motivation is to fill out his own emptiness and not a lust for power, control, revenge, or destruction, making him more of a tragic figure than a malevolent entity.

During gameplay, Void appears at the start of a board to shatter the Precioustone into fragments to be collected by the players. After the second, fourth and sixth Precioustones are collected, Void appears on a Precioustone space somewhere. If a player reaches him, they can pay him 50 Rings to attempt to steal a Precioustone from a player selected by roulette. If he succeeds, the player gets the stolen Precioustone, but will then warp to a random space. He also makes appearances in the Mini-Events as various characters alongside Lumina, Illumina and Dr. Eggman. 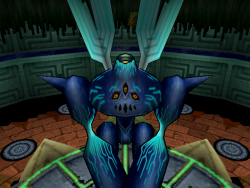 Void's monstrous form, as seen in the final minigame of Sonic Shuffle.

Prior to the events of Sonic Shuffle, Illumina loses sight of herself and her dream, leading to Lumina and Void's creation. Upon his birth, Void begins to suffer from loneliness and gains the desire to become whole again. Reasoning that since he was a piece of the Precioustone, and thus a part of a feeling needed for dreams to exist, Void sought out this crystal, believing it could make him whole. However, his dark powers cause the Perfect Precioustone to shatter upon contact.

Upon the destruction of the Precioustone, Void travels to the different worlds within Maginaryworld to track down the fragments, with his dark powers corrupting the worlds and transforming them into radically different environments. However, he faces opposition from Sonic, Tails, Knuckles and Amy who had been brought to Maginaryworld by Lumina to help her recover the Precioustones. Whenever Sonic and his friends recovered a Precioustone, Void appeared in a vision before them with Lumina where he expressed his depression and loneliness to them, and attempts to reason with Lumina.

In the climax of the game, Void attempts to seek out the Precioustone within the Temple of Light again, but is stopped by Lumina, Sonic and their friends. Due to the constant rejection from the group, Void's loneliness and sadness reach their peak and cause him to transform into a mindless rampaging monster. Upon his defeat, he is turned into a gem, where he continues to lament on how both Illumina and Lumina refused him. However, Sonic and his friends got Lumina to accept Void for what he is after convincing her that the negative emotions he represented were needed alongside positive emotions to give people the ability to dream. After this revelation, Lumina forgives Void and the two fuse to bring Illumina back.