Vanilla the Rabbit (ヴァニラ・ザ・ラビット) is Cream the Rabbit's mother, both introduced in Sonic Advance 2. Similar in personality to her daughter, Vanilla is a polite and hospitable rabbit. She has never been a playable character, and her appearances are largely restricted to outings in which Cream plays a large role.

Vanilla is a very calm and composed woman who is nice, polite and kind to others just like her daughter. As shown in the cutscenes in Sonic Rush, she does not seem to be bothered by how Cream goes out on dangerous adventures with Sonic and his friends, though she prefers to live a quiet lifestyle.

In her Advance 2 debut, Vanilla is first mentioned after Sonic rescues Cream and Cheese from the Egg Hammer Tank II in Leaf Forest. Sonic speeds off while Cream is in the middle of thanking him - too quickly for her to explain that her mom is still in trouble. Cream, consequently, has to deal with the problem herself; when the rabbit clears XX and drops from the sky as Egg Utopia crashes, Vanilla is there safe and sound.

However, this isn't the end of the game. In the opening curscene for the real final level, True Area 53, Vanilla is sucked up into Dr. Eggman's final boss machine and held inside an Egg Capsule. Super Sonic fights the last enemy and saves Vanilla in a fall from space.

Vanilla also makes a very short appearance in the ending sequence of Sonic Advance 3, after the player clears Nonaggression with Super Sonic and Eggman. Cream and Vanilla find the ruined Gemerl on the beach, and take him to be repaired by Tails in his workshop. Gemerl subsequently lives peacefully with Vanilla and Cream.[2]

Sonic Rush sees Vanilla in a small dialogue role when Cream brings Blaze the Cat back to her mother's house. Vanilla agrees with Cream that Blaze should seek Sonic's help in recovering the Sol Emeralds; advice which Blaze does not bother to take on board despite their insistence. She later points Sonic and Tails in the cat's direction. 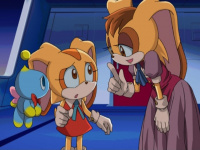 In Sonic X, Vanilla was separated from her daughter Cream. Vanilla shows up with the Chaotix team of Vector the Crocodile, Charmy Bee, and Espio the Chameleon, when they went looking for Cream and Sonic. Tracking down the speedy hedgehog, they find him and his friends at the mansion of Chris Thorndyke. The staff at the mansion meet Vanilla for the first time, and Cream is happy to see her mom. Cream stays with her mom throughout the new episodes, helping her with meals as she did with Ella and Amy at the mansion.

The first use of Vanilla's name came in the Japanese version of Sonic X, where Episode 40 includes an eyecatch card with her profile, where she is described as extremely polite and strict with her discipline, and that it seems she taught her daughter to use the polite language as well.

In the Sonic the Hedgehog comic series and spin-offs from Archie Comics, Vanilla originally lived in the Southern Baronies with her daughter. One day, however, Snively attacked the estate, and though Amy came to their rescue, their home was destroyed, so they were relocated to New Mobotropolis. While Vanilla had difficulty adjusting to her new life, she would eventually accept it.

After the Super Genesis Wave altered Sonic's universe, Vanilla's past changed to be the same as in the video games, and Vanilla resided in Mobotropolis with Cream, Cheese, Chocola and Gemerl.

In the Sonic the Hedgehog comic series from IDW Publishing, Vanilla lives in Floral Forest Village with Cream, Cheese, Chocola and Gemerl. Though the Zombots invaded their home, she was safely evacuated along with her daughter.