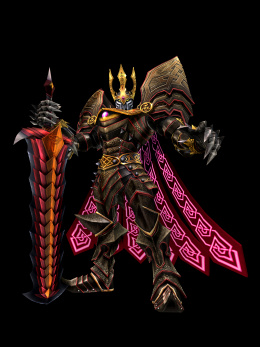 King Arthur, also known as the Black Knight, is a character and recurring boss in Sonic and the Black Knight. The major antagonist for the first half of the game, King Arthur is the reason Sonic is summoned to the Arthurian realm by Merlina the Wizard. He is a playable character in the game's multiplayer battle mode.

Many years before the events of Sonic and the Black Knight (and apparently unknown to all except Merlina), the wizard Merlin created King Arthur as a magical illusion to rule over the Grand Kingdom as a just monarch. Gathering around him the Knights of the Round Table, Arthur led the realm into an era of peace and prosperity. It seems, however, that Merlin's plan was too successful. Convinced of Arthur's virtue and chivalry, Nimue, Lady of the Lake granted the King Excalibur, perhaps the most powerful artefact in the storybook world. The King was made immortal by the enchantment of Excalibur's scabbard - a great power which corrupted Arthur from a noble ruler into a demon-summoning tyrant, and plunged the kingdom into darkness and terror. Merlina expresses the opinion that, all things considered, King Arthur was "[her] grandfather's greatest mistake".

After Sonic and Caliburn slay King Arthur on Faraway Avalon, Merlina reveals the secret of Arthur's genesis to the shocked Knights of the Round Table, before taking the Scabbard of Excalibur herself to effect her true plan: placing the Kingdom in magical stasis, to bring about an "eternal realm" which was Merlin's original dream (and in Sonic's words, boring and lame). As the Dark Queen, she is defeated by Excalibur Sonic.

During the game's end sequence, Caliburn reveals that only he is authorized to determine the true king of the realm, thereby meaning it is Sonic who truly deserves the title of King Arthur.

Arthur's massive Zweihänder weapon, Deathcalibur is used by the Black Knight not only for conventional combat, but also as a means of summoning the Knights of the Underworld to the Grand Kingdom [1]. The sword focuses many of the King's attacks during the Faraway Avalon battle.

Despite its name, Deathcalibur is not a component of Excalibur nor one of the Sacred Swords. It appears to be as illusory as Arthur himself, dissolving to black mist along with the King after Sonic slays him.[2]

Sonic faces the Black Knight twice during the game; first in Misty Lake, then on Faraway Avalon.

"Now, let us see the power of your so-called sacred sword!"

King Arthur first tracks down Sonic and Merlina shortly after they obtain Caliburn the Sword. However, Caliburn lacks a sharp blade and Sonic lacks any sort of swordsmanship skill whatsoever. Sonic has to chase the King's horse and strike him with Caliburn by shaking the Wiimote when prompted. Although Sonic manages to knock Arthur off his steed, the magic of Excalibur's scabbard means that the King simply shrugs off the damage, and leaves after deeming Sonic not worthy of death by his hand. This is something of a 'tutorial' boss fight.

"You shall regret the day you ever raised your sword against me!"

Their second clash is a more heated duel on Avalon island, the Black Knight apparently taking Sonic seriously this time. The King deploys a variety of magical attacks, including:

The boss fight on Faraway Avalon.

It has a card in Sonic Tweet as other characters of Sonic and the Black Knight.

King Arthur appears again in Sonic Runners as a companion. 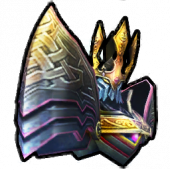