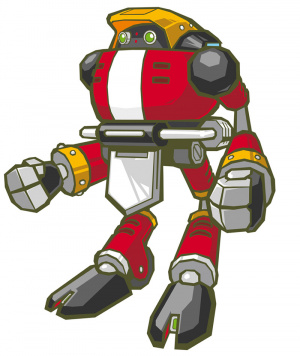 Chaos Gamma is Doctor Eggman's principal robotic enforcer throughout Sonic Battle, the only game in which he features. Expressly not the same robot as appeared in Sonic Adventure, Chaos Gamma's resemblance to the E-Series robots E-102 Gamma, and to a lesser extent E-123 Omega, is nevertheless commented on by the other characters in the game.

Rouge the Bat claims that Chaos Gamma is a prototype robot created as the Doctor experiments with using Chaos Emeralds, and their shards, as power sources for his combat mechs (possibly forgetting that he tried that same thing some years ago). The thief tells Knuckles "He used a bunch of old parts to create guinea pigs for his experiments. That robot probably just has parts that you recognize"; suggesting that Chaos Gamma may be at least a partial rebuild of E-102, after the robot's remains ended up blasted across the deck of original Egg Carrier.

Ironically, Chaos Gamma seems to share more personality with Gamma's destroyer, E-101 Beta, than he does with E-102. The robot harbors deep feelings of resentment and jealousy towards Emerl, apparently because of the Chaos Emerald which the Doctor implanted inside the Gizoid; Chaos Gamma feels that the gem should have gone to him. During Knuckles' episode, Chaos Gamma begs the Doctor for one of the other Emeralds still in his possession; and in Cream's story, we find that Eggman at least consented to give the robot an Emerald shard like the E-121 Phis. Chaos Gamma takes sadistic pleasure in pummelling Emerl as he and Cream try to escape from Gimme Shelter.

Towards the end of the game, Chaos Gamma remains at the Gimme Shelter depot, available for training. From a gameplay perspective, his moves frequently have high power but low speed, limiting their applicability in Emerl's skill set.