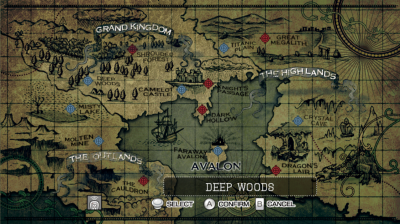 The Grand Kingdom is the domain of King Arthur in the world of Sonic and the Black Knight. Visible on the game's map screen, the Kingdom takes up the north-west corner of the game world. It is dominated by forests, especially in the north.

Areas visited by Sonic during his adventures in Sonic and the Black Knight that lie within the borders of the Kingdom proper are Deep Woods, Camelot Castle, Knight's Passage, Shrouded Forest, and Dark Hollow.

Lying to the south-west of Grand Kingdom, The Outlands stretch from the southern edge of the forest to the volcanic hills far in the south. Playable areas located within this region are Misty Lake, Molten Mine, and The Cauldron.

Covering the entire eastern side of the map, The Highlands start as rolling, grassy hills, giving way to vast cave systems in the south. This region is inhabited by migratory tribes of Arthurian folk, who travel the grasslands in vast wooden city-wagons. Game stages include Titanic Plain, Great Megalith, Crystal Cave, and Dragon's Lair.

Taking up much of the central southern portion of the map is a large sea, featuring only one island: Faraway Avalon. It is here that Sonic fights his final boss battle against King Arthur.