When E-102 Gamma is first activated by Eggman, and scans around the robotics lab in Final Egg, two Sonic robots can be seen floating inside green suspension tubes. One is Metal Sonic himself, while the other is the previously unseen Mecha Sonic Mk. III[1]. While never seen active, the robot's design was used for the character of Silver Sonic II in the Archie Sonic comics. 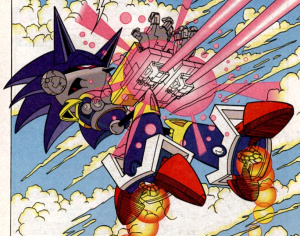 In the Sonic the Hedgehog Archie Comic issue #39 and Sonic & Knuckles: Mecha Madness, Sonic is dubbed "Mecha Sonic" when he's captured by Nack and roboticized by Dr. Robotnik.

This Mecha Sonic attacked Bunnie Rabbot and Knuckles before it started to destroy Knothole Village. It was eventually attacked by Knuckles again, roboticized into Mecha Knuckles. The two battled until it punched Mecha Knuckles clear into Robotropolis toward a stockpile of nuclear warheads. Mecha Knuckles, using the power of magnetization, attracted Mecha Sonic, causing both of them to fall into the stockpile. The explosion of the nuclear warheads greatly damaged Mecha Sonic, but left it active enough to retrieve Sonic's life force to return him to normal.

This Mecha Sonic's body contained rocket-propelled feet, a communication device on its wrist along with laser cannons, optic lasers in its eyes and a "brain burn-thru" device to ensure compliance. Robotnik also developed the body to enhance the speed and strength that Sonic originally had.

The design and workings of Mecha Sonic would later be used by Dr. Robotnik to develop an improved Mecha Sonic he called Silver Sonic. 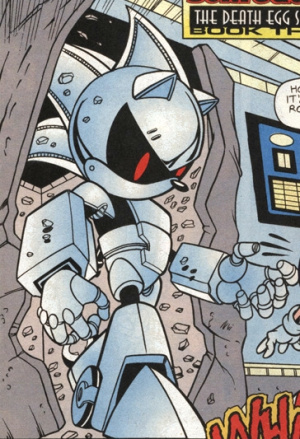 In Sonic Quest 3 of the Sonic the Hedgehog Archie Comic series, Silver Sonic is a robot designed by Dr. Robotnik. It is an upgraded version of Mecha Sonic, using its design as a basis and building up on its strength and skills to create a better robot. It was used as one of Robotnik's last resort plans on board his Death Egg, in case an emergency came up.

Such an emergency came up when Tails and Sonic infiltrated Robotnik's Death Egg, destroying its master controls and sending it on an uncontrollable course into space. Robotnik, from his auxiliary control room on the station, summoned Silver Sonic to defeat the two Freedom Fighter intruders.

Although Silver Sonic's strength is considerably more than that of Sonic, notably being able to absorb many hits from him, it has a weakness to electricity. Sonic was able to use a broken live wire and attach it to Silver Sonic, incapacitating it. With Silver Sonic indisposed, Robotnik used his "Plan E", which involved him dressing up in a suit connected to the strength of the Death Egg itself.

This robot's design is likely based off of the silver Mecha Sonic from Sonic 2, albeit much larger.