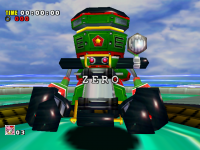 In Sonic Adventure, ZERO functions as the principal foil in Amy Rose's story. The robot spends the game chasing a blue bird named Birdie who had taken refuge with the pink hedgehog. ZERO chases Amy around Station Square, finally catching up in Twinkle Park. After being imprisoned in the Egg Carrier, Amy escapes with help from E-102 Gamma and wanders into the Hot Shelter, where ZERO found her and started chasing her again. Even after Dr. Eggman had already taken the bird's Chaos Emerald and the Egg Carrier had crashed into the ocean, ZERO persistently continued its directive to chase Amy while she was searching for the bird's parents in Final Egg.

The robot functions not just as a plot device, but also as a persistent threat within Action Stages themselves, following Amy around each of her levels, and more often than not is Amy required to avoid it by using stealth or simply running away. She can attack ZERO to push it back, but hitting it too many times will make it enter an "overdrive" mode which makes Amy's attacks ineffective. ZERO is unequivocally destroyed by Amy in the boss battle at the end of her story.

In Sonic X, ZERO first appeared in the episode A Chaotic Day. Its role in the series is largely the same as in Sonic Adventure: capturing Amy and Birdie (named Lily in this series) and bringing them aboard the Egg Carrier.