For the theme song associated with the character, see Infinite (song).

Infinite (インフィニット Infinitto), formerly known as the "Ultimate Mercenary", is the secondary antagonist of Sonic Forces, and is characterized by his black fur, silver mask, and a Phantom Ruby prototype on his chest. He is a jackal with predominantly black fur and some white marks on his body, including his face, his hair and the tip of his tail; he also has a scar mark on his left eye and has heterochromia (and is one of two characters in the series to be depicted with it; the other being the G.U.N. Commander), so his left eye is blue and his right eye is yellow. As an ally to Dr. Eggman, Infinite carries out much of the doctor's schemes by defeating and capturing Sonic the Hedgehog, allowing the doctor to succeed in his conquest of the planet.

Infinite was created with an impressive and strong presence in mind, according to Forces' producer and writer Shun Nakamura. Staff at Sonic Team were inspired by his nature to elaborate on his origin story, and his design was made especially to emphasize his evil nature. 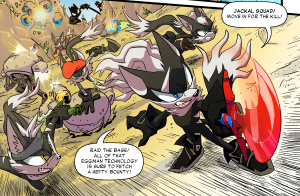 Infinite when he was the leader of the Jackal Squad.

During the prequel comic, Rise of Infinite, a squad of thieves known as the Jackal Squad, led by what they considered to be the "Ultimate Mercenary", seized Eggman's base in the Arsenal Pyramid while the scientist was studying the Phantom Ruby in an attempt to steal his devices for a hefty bounty. Eggman uses the recently-discovered Phantom Ruby to summon a squadron of Egg Pawns to fend off the thieves. The squadron commander goes ahead past the Egg Pawns and attacks Eggman, but accidentally strikes the Phantom Ruby, causing it to show an illusion of a world ravaged by war, after which Eggman proposes a deal for the Jackal Squad to ally with the Eggman Empire and thus achieve both of their objectives together.

Some time later, during the events of Episode Shadow, Shadow the Hedgehog invades one of Eggman's secret labs in the Mystic Jungle, and the scientist orders the Jackal Squad to exterminate him, failing in the process as the black hedgehog easily defeats them. After being berated for his incompetence by Eggman, the squad leader pursues Shadow and then swears revenge for his team, only for the brooding hedgehog to lay a beatdown on him and call him worthless. After this, the jackal throws a tantrum over how weak he truly was.

Bitter about his defeat to Shadow, Infinite would then fuse with the finalized Phantom Ruby prototype in an attempt to become stronger, and put on a mask to hide his scars and cast away his weaker self, becoming a powerful tyrant. Reborn, Infinite became Eggman's right-hand man in his conquest, and among his first acts of tyranny he effortlessly defeated E-123 Omega, who was slaughtering a lot of Eggman's robots on his way through Eggman's base.

A few months later, Sonic is again on a mission to defeat Eggman. However, Infinite intervenes by using replicas of past villains who defeat the blue hedgehog without much effort. With Sonic finally defeated and trapped in a space prison, Eggman and Infinite conquer 99% of the world, destroying cities and terrorizing citizens using machines, robots and the power of the Phantom Ruby; on one of these occasions, Infinite encounters a young citizen who unsuccessfully tries to attack him. Six months after Sonic's defeat, Infinite eventually finds opposition in the form of the Resistance, engaging Sonic and the Avatar on multiple occasions until he is defeated in the final battle. After his defeat, Infinite appeared to vanish.

Infinite is an enigmatic, yet lethal being who is cold, stern and extremely sadistic, as he takes great pleasure in the pain and suffering of others, and even willingly lets the Avatar flee just to be able to relish in their terrified screams.

In his past, Infinite was seen to at least have some degree of care for the other members of his team, the Jackal Squad, as he expressed anger over Shadow taking out his men. He also has an inferiority complex, which is perhaps his most notable character trait, as his defeat at the hands of Shadow left him feeling bitter to the point of fusing with the Phantom Ruby prototype and never showing his old face again. Other indications of this trait were shown where he expressed disgust at Eggman calling a retreat, viewing it as a tacit admission to weakness. Even after his defeat, Infinite tries to insist that he can fight on, even as he is pulled from the battlefield. This may have developed into a mad obsession with strength.

Using the power of the Phantom Ruby, Infinite is capable of unprecedented speed, acceleration and strength that surpasses even Sonic himself, and has the ability to generate, destroy and/or manipulate virtual realities as well as false presence of other characters such as Zavok and Chaos by taking control of the victim's visual and depth perception to feed false information to the brain. His illusions are potent enough to be capable of causing illusory injury to affect the victim's physical body. He is also capable of summoning a large supply of red cubes that he can skillfully and willingly move around, sending anyone who touches them into a virtual reality. His power was so great that not even the Miles Electric was able to give an accurate reading of his capabilities.

Infinite is fought three times throughout Sonic Forces as the second, fourth and sixth bosses of the game, faced by Modern Sonic and the Avatar accordingly. The first battle comes after Luminous Forest and is against Modern Sonic; the second battle comes after Capital City and is against the Avatar; and the third battle comes after Mortar Canyon and is at first against Sonic, but then changes into a battle against both Sonic and the Avatar. During each of these battles, taking damage will result in the player getting thrown into a brief virtual reality with extra hazards. The first and the third battle have the player chase after Infinite, while the second one takes place in an arena. Classic Sonic does not get to fight him at any point in the game.