The Sonic Forces digital comic is a four-part digital comic series published by Sega to promote the at-the-time upcoming Sonic Forces, with the scripting by Sonic Team and fan-favorite writer Ian Flynn, and illustrated by Adam Bryce Thomas. Four issues were released on the official Twitter and Tumblr pages, and each issue features a short, self-contained story that serves as a prequel and is canon to the Sonic Forces storyline. With the exception of the last issue, which was released when the game came out (a Tuesday), all issues were released on a Thursday.

The four issues are as follows:

In the city, a Resistance soldier hangs on the guard rail on top of a building, remembering how he was inspired to be heroic like Sonic, Tails, and Amy. Unfortunately, he is too cowardly to live up to his dreams to be a hero, preferring to be on look-out duty than fight against Eggman's Egg Pawns. To add to his self-loathing, he even recollects the Chaotix's involvement in helping drive away Eggman's forces, despite their goofy nature. As the soldier contemplates quitting the Resistance, he notices the incoming battalion of Egg Pawns dropping from an Eggman Empire air fortress, preparing to strike the city.

The soldier warns the other Resistance members, in which the Chaotix swiftly take action and send out the Resistance units to their battle stations. Vector notices the cowardly soldier on the rooftop and requests for his help in the Resistance's defenses. The soldier obliges, but struggles to pick up a pipe, which Vector grabs from him, urging the soldier to not stall time by performing a task he knows he cannot do. Espio gives the cowardly soldier the Burst Wispon in an attempt to help out with the defense against the Egg Pawns, only for the soldier to accidentally use the weapon against Charmy Bee. The Chaotix and several Resistance members prepare at the city's front gates as the Egg Pawns come crashing in, with the heroes charging right at them with heavy defense.

Realizing that he is nothing more than a failure not only with his cowardly demeanor but his strength and competence in utilizing weapons, the soldier hides behind several crates in an alleyway away from the battlefield, once again mentally beating himself up for his mistakes and fear. The soldier overhears Vector asking his forces to use the artillery cannon to fire at the air fortress that is sending in the Egg Pawns, to which the soldier realizes could be his one chance at redemption. Seeing a single bomb next the crate beside him, the soldier grabs the bomb and high-tails it to the artillery cannon, where he fires spot-on at the air fortress. With the bomb causing heavy damage to the fortress. Eggman decides to retreat from the battle, promising he will return with more opposition to counter the heroes. The Chaotix congratulate the soldier for his outstanding work, baffled at his ability to aim flawlessly at the air fortress. The soldier, while proud at his accomplishments, still believes he could have done more, inspiring him to pursue higher lengths than before next time so he can become a true hero. 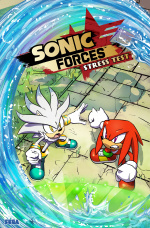 Knuckles the Echidna rests next to the Master Emerald on Angel Island, enjoying the peace and quiet and thinking about how it has been a while since the last time he was made a part of one of Sonic's adventures. That is, until Silver the Hedgehog interrupts the peace, floating onto the island and attempting to warn Knuckles about "big trouble" of some sort involving Dr. Eggman. Knuckles, remembering Silver went back to the future previously, is convinced he is just dreaming, but Silver insists he has returned with dire news from the future. However, the two soon notice that the island around them has suddenly disappeared, and in its place is Pachacamac's village from the past, filled with Knuckles Clan members. Knuckles grabs and shakes Silver, asking him if he brought them back in time, but Silver tells him that he just returned to the present and is completely clueless.

In the midst of another attempt to inform him of the bad news, Silver notices something rise from the Master Emerald behind Knuckles and warns him of it. Knuckles is not worried, telling him that it is just Chaos, the peaceful guardian of the Chao, and that he is harmless. Much to the contrary, Chaos punches Knuckles, who mentions that he forgot the guardian has a bad temper and that he knows how to pacify him. Knuckles attempts to retaliate against Chaos, but fails to land an effective blow against the liquid creature, who simply blasts him away with a jet of water. Silver opts to defeat Chaos instead, using his telekinetic abilities to hold him in place. However, a small puddle of Chaos he failed to grab hits him, breaking his hold; after noting this as a "new trick", Knuckles tells Silver that they need to work together, ordering him to grant him an opening to punch Chaos's brain. Upon Knuckles's command, Silver once again uses telekinesis to grab Chaos, granting the echidna the opening he needs. Once Knuckles's punch connects, Chaos suddenly disappears in a flash of pink sparkles, as does Pachacamac's village, leaving Knuckles bewildered.

Silver is certain that all of this has something to do with the impending disaster; he explains further that something happens at this point in time that ruins the world, but the historical records on this event are either not written in detail or do not make sense, so he returned to the present to stop it in its tracks and save the future. Knuckles figures that Silver came to him because he would not have known about the events below until they had already come to pass and comes to the conclusion that his involvement in said events must be important to the world's salvation, so he vows to be very involved and lead the resistance against whatever is happening. Silver, while not certain that is necessary, is grateful for his help, and the two leap off Angel Island to act further. Unbeknownst to either of them, Dr. Eggman has been watching from above in his Egg Mobile with the Phantom Ruby in his grasp and laughing evilly. The evil scientist is pleased that his first test of the Ruby's power was a success, believing he won't even need to steal the Master Emerald with it in his possession. He also proclaims that Sonic has no chance of survival against the Ruby's power. 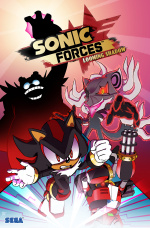 The plot for this issue is a prelude to Episode Shadow. In a desertified area, E-123 Omega has infiltrated Dr. Eggman's base and is seeking to defeat him. As he is blasting through the doctor's minions, Rouge the Bat contacts him to tell him he should calm down and wait for back-up from Shadow. Omega refuses to wait, believing he can get the job done easily, much to Rouge's annoyance.

Meanwhile, Orbot informs Eggman that the base was being attacked. The evil scientist discovers it is Omega that is attacking and decides to call forth Infinite to deal with him as a test of his new abilities.

As Omega presses onwards, he eventually comes across Infinite. Not knowing who he is but still deeming him hostile, Omega prepared to fight him. Slightly amused, Infinite engages, engulfing Omega in a bright red flash. Omega struggles to contact Rouge and give her his exact coordinates. Soon, Rouge loses all communications with him completely. This prompts her to send Shadow into Eggman's base. Smiling, Shadow softly says to himself "So much for recon." 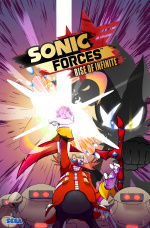 The story opens with Dr. Eggman in his latest lair with Orbot and Cubot. As the doctor struggles to come up with new robot designs, Orbot detects a strange energy signal just outside the base. Eggman walks out to find a strange gemstone half-buried in the sand. Confused, he grabs it, and is suddenly confronted by visions of Eggmanland. He drops the stone in awe, which ends the illusion, to Eggman's dismay. He takes it inside and, after spending some time testing it, finds it to be extremely useful, and begins experimenting on it. After Cubot suggests several names for the gem (including the "Anarchy Beryl" and the "Precious Stone"), Eggman decides to call it the Phantom Ruby. At that moment, the base is attacked by the Jackal Squad, a band of mercenaries lead by Infinite, who intends to sell the scavenged Eggman tech.

As the thieves attack, Eggman rages that he should have built his army up instead of studying the Phantom Ruby. At his whim, an army of Egg Pawns materialise. This confuses Eggman at first, but he decides to go with it and orders them to attack. Infinite, wielding a sword, breaks through to Eggman. He prepares to make the finishing blow, but his blade strikes the Phantom Ruby instead, and the Jackal finds himself in the illusion of a destroyed city. With Infinite distracted, Eggman knocks him away. Intrigued by Infinite, the doctor offers to hire him to be commander of his army. Though his teammates discourage him, Infinite finds the idea interesting, and admits that lately he's just been going through the motions, and finds the current world he lives in dull. He then agrees to Eggman's offer, vowing to change the world.