Charmy Bee (チャーミー・ビー) is an extremely hyperactive 6-year old bee with a heart as big as his stinger and a trademark flight helmet. He's 2'3" tall, though he mostly hovers in the air, and weighs 22 lbs. He works in the Chaotix Detective Agency with Espio the Chameleon and Vector the Crocodile as the flight member. He also has the ability to warp between special flowers. He loves all kinds of flowers, and he also loves honey and taking long naps.

His first appearance was in a Japanese Sonic Manga. His first game appearance was in the Sega 32X game Chaotix (where he was labeled as 16 years of age in the US game manual, though his age was never stated in the original Japanese manual). He also appeared in Sonic Heroes, as part of Team Chaotix, and Shadow the Hedgehog.

In Shadow the Hedgehog, he helps out during the Prison Island level.

In Mario and Sonic at the Olympic Games, Charmy appears as a referee, alongside Espio. 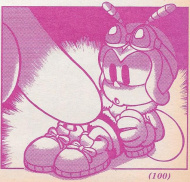 Charmy Bee was designed by Naoto Ohshima. As with Amy Rose, Charmy first appeared in the Sonic the Hedgehog manga and its accompanying illustrated prose series, Sonic no Daibouken. Whereas Amy was created as a character for the video games first,[6][7] Ohshima vaguely recalls that Charmy may have been created specifically for the manga.[8] Charmy made his debut in the second chapter of Sonic no Daibouken, in the May 1992 issue of Shogaku Yonensei (published 3 April 1992).

Charmy made his video game debut as a playable character in 1995's Chaotix, with a slight redesign and greater stature.

Charmy returned in 2003's Sonic Heroes, as the Fly Type character of Team Chaotix. This iteration of Charmy Bee was redesigned by Nobuhiko Honda and was given a new character biography, differing from the character profile in Chaotix's manual.

In an interview regarding Sonic Heroes, Takashi Iizuka stated that, in his mind, he didn't bring back Vector, Espio and Charmy as characters from the past. Instead he considered them to be new characters, recreated from the ground up. This explains why, in Sonic Heroes, Vector, Espio and Charmy show no familiarity with other characters they had previously featured alongside. At one point in the game, Charmy Bee asks who Dr. Eggman is. In a 2020 episode of the BumbleKast podcast, comic book writer Ian Flynn said his understanding is that the original Chaotix game is currently considered non-canonical.[9]

Charmy Bee first appeared in issue #53's Knuckles: Total Chaotix, Part 1. Charmy is a member of the Chaotix Crew, a team of super-heroes operating in the Special Zone. Unbeknownst to his teammates, he is actually a prince. More often than not, Charmy's name is misspelled Charmee.

In the Archie comics, Charmy was a sophisticated 16-year-old prince, before time in the Egg Grapes gave him sufficient enough brain damage to behave like the games' version. He has a fiancée, Saffron Bee.

Following the events of issue #251, reality was rebooted. In the rebooted universe, Charmy's history and personality were brought more in line with the depiction in the video games.

Charmy appears working in the Casino Night while Knuckles the Echidna was brought there against his will to fight.