Sonic the Hedgehog (ソニック・ザ・ヘッジホッグ) is the name of a manga series based on the Sonic the Hedgehog video game series during the early 1990s. It was not released as a stand-alone product, but was instead serialized in several magazines published by Shogakukan, aimed at Japanese elementary school children.

The manga series was featured in the following magazines. Each series was intended to be read independently, with storylines sometimes continuing from issue to issue, but no shared continuity between the different magazines.

The cast of the manga Sonic the Hedgehog.

The series follows the adventures of Nicky, a young, bookish-looking hedgehog who through some manner is able to transform into the actual hero of the story, Sonic the Hedgehog. When being the blue hedgehog, he is joined by Miles "Tails" Prower, his protégé, and the two work together to stop Dr. Eggman and whatever evil schemes may be up his sleeve.

While the escapades of Sonic were the highlight of the strip, his alter-ego Nicky was provided with his own full cast of supporting characters. Nicky lived in Hedgehog Town, a setting similar to modern day Japan, along with his family and friends. His parents were named Paulie and Brenda (Paulie, the father, dressed in clothing reminiscent of a fighter pilot), and he also had a little sister, Tania (named Anita in Sango Morimoto's stories). Outside of his home life, Nicky's best friend was a pudgy hedgehog named Little John, and he also had a girlfriend, named Amy. This character would later appear in the video games as Amy Rose, albeit not in the same function. 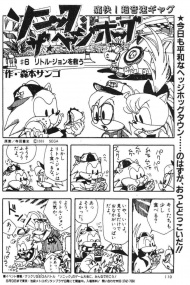 The first page of the story "Save Little John", chapter #6 of Shogaku Rokunensei's Sonic serial. From the September 1992 issue.

Whilst Sonic would frequently be threatened by Dr. Eggman, Nicky's main antagonist was the biggest delinquent in town, a lizard named Anton Veruca. Anton lived in a cave on the outskirts of Hedgehog Town with his family - younger brothers Mud, Hud and Tod, younger sister Migu, father Hogi and the scariest of the Veruca family, his mother Vera. Anton and his siblings would do nothing but try and cause trouble for Nicky and his friends, but they would always get their comeuppance once Sonic arrived on the scene. An early version of Charmy Bee was also featured in the comic, although it is unknown what role he played, beyond being a friend toward Sonic.

Except for Tails, nobody knows that Nicky is actually Sonic the Hedgehog, including himself.

The Sonic the Hedgehog manga is thought to have been the first Sonic-related storyline created outside the direct influence of Sega, giving its writers a freedom that the games would not be otherwise able to traverse. The overall concept for the series, its premise, setting and characters, were developed by Kenji Terada, a well known anime script writer and scenario writer for the first three Final Fantasy video games. Although Terada is credited for the original story concept in every issue, the only stories he wrote directly were the Sonic no Daibouken illustrated prose adventures in Shogaku Yonensei.

Although the manga series was an initiative lead by Sega of Japan's marketing team, with the aim increasing Sonic's appeal to a young audience, the Sega design team was involved in the production process, with Naoto Ohshima and others being involved in the creation of the characters[1] (such as Amy and Charmy Bee).

The other writers and artists of the manga, incuding Sango Morimoto, Hirokazu Hikawa and Koichi Tanaka, created their own stories based upon the concepts and characters developed by Kenji Terada and Sega. Because of this, they all shared common elements, such as Nicky, Amy, Anton Veruca and Hedgehog Town. However, there were some discrepancies, most noticeably in Sango Morimoto's comics, which included oddities such as Amy sporting a ponytail, Nicky's little sister being named Anita rather than Tania and a radically different design for Charmy Bee.

Little is known about this manga series, as copies of the original strips are extremely rare. Unlike the Dash & Spin series published years later by Shogakukan, the strip was never collected into book volumes, remaining exclusive to the original magazines.