The Avatar (アバター Abatā), also known as the Custom Hero (カスタムヒーロー Kasutamu Hīrō), is one of the protagonists of Sonic Forces, and is a character that the player can customize to their liking.

As an ordinary citizen, the Avatar is caught up in the war between the Resistance and the Eggman Empire, eventually joining the Resistance as their newest recruit. Lacking in courage at first, they form a strong partnership with Sonic the Hedgehog and eventually rise up the be the hero to help the Resistance reclaim the world from Dr. Eggman's domination.

According to Takashi Iizuka, the Avatar was created with the goal of making a character with a unique gameplay experience to differentiate them from other characters in the Sonic series, while catering to fans who wanted more gameplay variety but also wanted to play as Sonic. The idea for the Avatar to be a customizable character first began over twenty years ago when Iizuka took notice of all the Sonic-type characters the fans (especially Western fans) were creating and sending him via fan-mail. Iizuka wanted to let people do that to some extent, but it wasn't until Sonic Forces that Sonic Team acquired the skills, people, and technology to make this possible in a Sonic game.[1][2]

The Avatar starts off as an ordinary citizen living in Sonic's world, until one day, Dr. Eggman took over the planet with the help of his newest ally Infinite. The Avatar joins a group of soldiers to take on the Eggman Empire, but all of their allies are promptly wiped out by Infinite. They try to stand up to Infinite despite their anxiety and doubt, but Infinite sees through their facade and leaves them to flee so he can relish in their fear.

A couple of months later, the Avatar joins the Resistance as their newest recruit in spite of the terrified tension among the populace, and is given a Burst Wispon by Knuckles and sent on their first mission: to capture a shuttle at the Spaceport to reach Sonic with, who turned out to be imprisoned on the Death Egg. Onboard, they choose the best route possible which leads to Sonic's release from imprisonment, but their fear nearly gets the better of them as they end up being surrounded by Egg Pawns, leading to Sonic rescuing them. Though their cowardice did not sit well with the Resistance, they are given the opportunity to work alongside Sonic as he takes on Eggman's weapon factory. Afterwards, Knuckles gives the Avatar more missions that help the Avatar become more skilled, such as rescuing civilians from an attack by Eggman's army as well as investigating the area where Sonic and Silver fought Infinite earlier, eventually finding a Phantom Ruby prototype as well as Tails and Classic Sonic.

When Knuckles launches "Operation Big Wave", the Avatar joins the attack on Capital City. However, when Infinite turned the fight around with the Phantom Ruby (the Eggman Empire's secret weapon), the Avatar scrambled to retreat. Along the way, they met Infinite, who tried intimidating them. At that point, by remembering Sonic's words of encouragement, the Avatar is able to build the courage to fight back against Infinite, with the Phantom Ruby prototype giving them protection from Infinite's powers. Infinite spares the Avatar so they can swelter in fear, knowing that Eggman will ultimately crush the Resistance in two days. Afterwards, the Avatar continues to carry out missions for the Resistance, such as helping Sonic take out a Metal Sonic replica and setting up a distraction at Guardian Rock so the Resistance can destroy the Phantom Ruby's power source. Later, when Eggman and Infinite banish Sonic into Null Space, the Avatar tries to rescue him, only to be sucked in with him, but together the two heroes make it out and rejoin the fight to track down Eggman.

At the Eggman Empire Fortress, Eggman and Infinite unleash their endgame: a virtual sun that would crash down on the planet and completely eliminate the Resistance. As the sun falls however, Tails notices the Avatar's Phantom Ruby prototype, and deduced that they could use it to neutralize the sun. Since the prototype's design only lets the Avatar use it, they make their way to the sun and wipes it out, giving the Resistance a fighting chance. Afterwards, they catch up to Sonic and help him defeat Infinite for good, causing him to vanish, and then the two make their way into the confines of the fortress and destroy the Phantom Ruby's power source, seemingly winning the war. This was a decoy, and Eggman had used the real Phantom Ruby to power his new Death Egg Robot. With the Eggman Army on the rise thanks to the Ruby, the Avatar works alongside both Sonics to fight Eggman and eventually destroy the Death Egg Robot and Ruby, ensuring victory for the Resistance.

After the war finally ends, the Avatar helps the Resistance clean up Eggman's mess around the world, with the Resistance disbanding once the work is done. Feeling that there are people out there who will need their help, the Avatar takes their leave, now having grown into a confident hero. After bidding farewell to Sonic, the Avatar leaves in pursuit of new adventures. 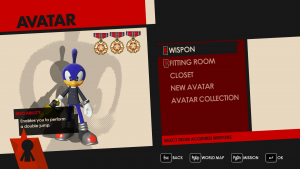 As a character who can be customized by the player, the Avatar has a variety of different customization options available to the player. The player chooses from a base of seven animal species, and can then customize the character's gender, upper headgear, middle headgear, lower headgear, gloves, shoes, accessories, bodysuit, eye style and skin color. As the player progresses, hundreds of accessories and costuming options will be unlocked for the player to use. The Avatar will also gain a unique ability depending on what species they are:

Gameplay-wise, the Avatar is similar to Modern Sonic, but uses a grappling hook as a means of platforming. They can also utilize unique gadgets known as Wispons, weapons that can harness Color Powers in ways that can be used for both attacking and movement. Before a level, the player can select which Wispon they would like to use, thereby allowing access to different parts of the levels.

There was originally going to be an option for the Avatar to be a dragon, but this idea was scrapped later in development.[3]

These vocal songs play during stages where the player would control the Avatar: