Bean the Dynamite (ビーン・ザ・ダイナマイト) is an anthropomorphic green woodpecker who debuted in the 1996 Sega Model 2 arcade game, Sonic the Fighters. He loves sports and is particularly good at soccer.

As was the case with fellow combatant, Bark the Polar Bear, Bean appears to have been created specifically with Sonic the Fighters in mind. He wears a red neckerchief, as well as the obligatory gloves and shoes, and is fought in Dynamite Plant. Bean is widely assumed to be some sort of explosives expert, as he has the ability to craft bombs (out of thin air) and is referred to as "dynamite" in his name (breaking the Sonic tradition in which characters are usually named after their species).

Bean is a Sega AM2 invention with roots outside of the Sonic universe, being derived from the 1988 Sega System 16 arcade game Dynamite Dux, in which two anthropomorphic ducks named Bin and Pin fight through screens of enemies with an array of weapons (including throwable black bombs). Dynamite Dux pre-dates the original Sonic the Hedgehog by three years. The Fighters Megamix Official Guide establishes that Bean is in fact Bin's son. The difference in species, Bin being a duck but Bean being a woodpecker, is not explained.

Bean has not appeared as a main character in a Sonic the Hedgehog game since 1996, although is unloackable in the Sega Saturn game, Fighters Megamix (which brings together a number of Sega AM2-made fighting games, among other novelty characters). His alternative costume in this game is one which makes the character resemble Bin from Dynamite Dux. Oddly enough, he also makes a cameo appearance in a later version of Virtua Striker 2.

Bean the Dynamite makes his debut in Sonic the Fighters, as one of the fastest characters in the game. He shows signs of hyper activity by using quick jerky actions like the terrific peck and a super quick windup punch. Throwing a tantrum when he loses, and looking toward the camera before each match, as well as making gestures of overconfidence, one can see that Bean very much loves to win, and may do anything necessary to do it!

For moves, Bean can quickly peck his opponent many times in a row (although this can be ducked under). He throws and even kicks round black bombs at his opponent, which seem to come from hammer space. Although many of Bean's moves are weak, he may be even faster than Sonic is, making him potentially difficult to beat in the right hands. Bean is the holder of the green Chaos Emerald and seems to use its power to go into hyper mode. While in hyper mode, Bean can perform his hyper technique: the Bean Warp. This move allows him to warp close to, or directly behind his opponent. Oddly familiar...

Bean is the seventh opponent that the player must defeat in order to reach Death Egg II, and holds the seventh Emerald. He is fought at Dynamite Plant, a zone outside of a bomb factory of sorts. The zone features an Oil Ocean Zone like background, which might have inspired the new course.

Bean himself does not appear in Sonic Generations, though his face can be seen on wanted posters shared with Bark all around City Escape, and both of them are wanted for being "armed and potentially dangerous". 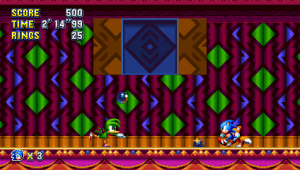 Bean, along with Bark and Fang, make surprise reappearances in Sonic Mania throughout Mirage Saloon Zone. However, they are not the actual characters, but are illusions created by the Heavy Magician. When the Heavy Magician transforms into Bean, she attacks by throwing bombs at the player.

He and Bark appear in issue #160 of Archie's Sonic the Hedgehog comic. During which, Bean jumps out of a window after Fiona Fox's keys, and is later knocked out by Shadow the Hedgehog. He also made a cameo in the series' 50th issue as well as on the cover of the series' 51st cover. Like Bark, he used to be part of a mercenary band led by Nack the Weasel. He is also known to be very annoying to Sonic.

Bean's personality in the Archie comics is defined as being rather goofy and eccentric, even being prone to mood swings and extreme reactions, making him a very unpredictable and potentially dangerous individual; however he is capable of being friendly and easy-going as easily as he can be indignant and angry. He also obsesses over shiny objects as well as a great love for bombs and explosions of all kinds.

He also appears in the Treasure Team Tango Arc (Sonic Universe Issue #21 - Issue #24) on Team Hooligan (Nack, Bean, and Bark) trying to steal the Sol Emerald from Team Rose. When his Team is ambushed by Team Babylon (end of Issue #22), he finds Jet the Hawk and reunites with him (Issue #23), asking him for photos.

Before the Super Genesis Wave, Bean, along with Bark, Nack, and the Destructix would later be officially hired by Mammoth Mogul to "steal" Sonic's shoes (with or without Sonic's feet still in them). All the while, Bean kept on admiring a shiny spoon, while the others talked business. Outside of Freedom HQ, Bean and Bark ambushed Sonic and Sally Acorn. Sally was able to distract Bean by getting him to notice how shiny one of his bombs was, causing him to clutch it in awe until it exploded. Afterwards, the Destructix began to attack Sonic while Bean and Bark watched, Bean cheering on the Destructix. Sally quickly told Bean and Bark she would pay them double whatever Mogul offered to help Sonic (Bean was intrigued, thinking the payment could possibly include cupcakes). Bean and Bark accepted and started helping Sonic fight against their former allies. When Bean and Bark failed to protect Sonic, they decided to go back to Mogul's side and returned to the Casino Night Zone with the Destructix while Nack stayed behind to finish off Sally. While at the casino's new kitchen, the Bottom of the Barrel Bar 'n' Grill, Bean kept pestering Sonic with odd questions about Sally and their "future children," which ended up thoroughly creeping Sonic out. However, after Sally, Amy, and Geoffrey St. John showed up and freed Sonic, Bean was then slid along a nearby table by Sonic, to which Bean enjoyed the experience with glee. Afterwards, Bean and Bark were not seen again, and it is assumed they came to, were paid by Mogul, and left the casino.

As a result of the Super Genesis Wave, Bean and Bark were transported to the Sol Zone where the two of them joined Captain Metal's crew, the Blackguard Pirates, before eventually helping Blaze the Cat along with Team Rose. After the Pirate Plunder Panic arc concluded, Bean and Bark, alongside Team Rose, were transported back home.

Later on, Bean and Bark reunited with their old partner Nack and were then hired by Dr. Eggman to track down the Chaos Emeralds during the Shattered World Crisis, which would lead them to clash with Knuckles the Echidna and the Chaotix over the Emerald they were all seeking, and again over Chip until a Dark Gaia Titan interrupts the fight. While Nack would take advantage of the distraction, Bean would use his bombs to block most of the exits to the cavern they were fighting in. While Team Hooligan tried to escape, the Chaotix followed them, and Charmy Bee tricks Bean into stopping the monster by telling him that it insulted his bombs, making him attack it in a fury and allowing the Chaotix to escape with Chip and the Emerald.

After their failure, Dr. Eggman assigns Team Hooligan to taking part in the Chaos Emerald Championship with the objective of participating in the tournament, and sabotage the Casino Park defenses in the event of their defeat. Bean would be pitted against Espio the Chameleon, defeating the ninja by annoying him with nonsensical babbling and apparent idiocy, making him angry enough to fall out of the ring without Bean even laying a finger on him. He would end up being pitted against his teammate Nack, in which he tries the same trick again before being ordered to give up. When Nack was eliminated, Team Hooligan carry out their orders to sabotage Casino Park's defenses, with Bean sticking bombs to the main security generator using bubblegum, allowing Metal Sonic to invade. Bean and his teammates made their escape, but the Freedom Fighters ended up with the Emerald.

Bean is an unlockable character in Fighters Megamix, a sort of "crossover" fighting game between the other fighters Sega had developed, including Sonic the Fighters.

Bean appeared as a member of the MVP Yuki Chan team, a secret team in Virtua Stiker 2, the second installment in Sega's popular arcade soccer series.

To access said team, at the Team Select screen, press:

Bean is a collectable figurine based on Sonic the Fighters.