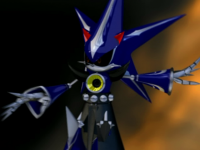 Neo Metal is the "mystery monster" of Sonic Heroes, and the game's true antagonist. Metal Sonic takes this form when he renegades against his master, Dr. Eggman, and (via Froggy and Chocola) acquires Chaos' ability to shapeshift. The robot imprisons his creator and takes over the Eggman Fleet by impersonating Eggman, intending to conquer the world and create a robotic empire. To this end he lures in the various teams of heroes, copying their combat data while disguised as the Doctor.

In the Last Story, Neo Metal Sonic reveals himself atop the spire of the Final Fortress, but only seconds later transforms into the dragon-like Metal Madness and Metal Overlord. At the very end of the game he transforms back down to the classic Metal Sonic model, losing his lengthy spines and cape.

The name "Neo Metal Sonic" is never used in-game during the English version of Heroes, but it is confirmed in Sonic Rivals, where 'Neo Metal Sonic' is the 150th (and final) collectible card.