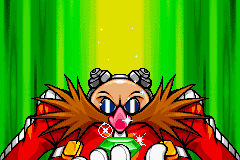 A Chaos Emerald descending into Eggman's hands, as shown in the opening sequence.

The story is largely basic, following a similar plot to the original Sonic the Hedgehog games. Late into the game, the player discovers that Eggman built the Egg Rocket which will go in outer space. Later, the player's character finds Eggman and chases him outside and defeats him.

Good Ending (clear X-Zone as Sonic with all Chaos Emeralds): After Sonic defeats Eggman, the evil genius escapes to the moon. Sonic transforms into Super Sonic and chases Eggman onto the moon for the true final battle. After Super Sonic defeats Eggman and flies off the moon, Tails, Knuckles, and Amy wondered what happened to Sonic, so Tails goes to search for Sonic a few days later. He finds Super Sonic who came from the moon, as Tails waves to him. 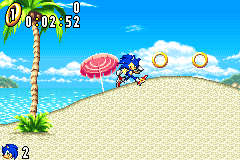 Gameplay in Sonic Advance emulates the gameplay style of the classic games as closely as possible.

Sonic Advance features four playable characters; Sonic the Hedgehog, Miles "Tails" Prower, Knuckles the Echidna, and, for the first time as a playable character in a classic-style 2D Sonic game, Amy Rose. Sonic can have Tails follow him, Sonic 2-style, by entering a special code at the character select screen. All characters have separate save-games which record their individual progress.

The player must play through 6 normal Zones, followed by the X-Zone and The Moon Zone if certain conditions are met. Each of the normal Zones contain two Acts. Act 1 is completed by passing a signpost and Act 2 is completed by defeating one of Dr. Eggman's machines and opening the capsule that subsequently falls from the sky, releasing the captive animals. Sonic Advance was the last game in the Sonic series until Sonic the Hedgehog 4 to use end-level signposts and capsules and Sonic's leg spin animation, and the first 2D Sonic game that allows the player's character to grind on rails.

The Special Stages are accessible from Special Springs, which are placed in specific locations in certain Acts. Each normal Zone contains one Special Spring, except for Ice Mountain Zone which contains two: one in each Act. Chaos Emeralds can be collected if one passes the stage. The Chaos Emeralds are "shared" between characters. Once the player has collected all the Emeralds and completed the X-Zone with all four characters, they can access the Moon Zone by completing the X-Zone again with Sonic.

This is one of several games to include the Tiny Chao Garden mini-game. It is unlocked by default in this game.

Controls are similar to previous 2D Sonic installments, and platform games in general. For all four characters, the

button makes them jump. Sonic, Tails, and Knuckles all simultaneously Spin Attack when jumping as in previous games, however Amy does not, making her significantly more vulnerable in a number of circumstances in the game, effectively making her the most difficult to play as. While stationary, hold

to look above and

to look below. Sonic, Tails, and Knuckles can Spin Dash by holding

, another classic feature, and can roll if running and pressing

. Amy's behavior when these buttons are pressed is different, and is considered a special ability. Each character has their own unique abilities, which influence the game's overall difficulty.

Each character's abilities are modeled after their special moves in Sonic Adventure. Sonic is the fastest character overall, Tails can fly and swim, Knuckles can glide and climb walls and Amy has her hammer. Each character's strengths and weaknesses particularly come into play when fighting bosses or trying to find access to the special stages.

All the characters can perform an attack by pressing the

button. These moves are most often less effective than a Spin Jump or a Spin Dash due to their short range. One of the characters can make combo attacks by pressing the button repeatedly. These and other special moves are explained below.

Sonic Advance offers multiple game modes for up to four players using Game Link Cables. If there are three or more players in Multi-Pak modes, players can choose to enable team play, in which they can play 2-on-1, 3-on-1, or 2-on-2. Playing in team play will enable special character-specific actions:

One of the available modes is a competitive race mode, with each player requiring their own copy of Sonic Advance to play. All players must race each other in any regular Act from the main game, with only Zones cleared by at least one connected player being available. Item Boxes will rotate in contents in this mode, offering items that can help players or hinder their opponents. The first player to reach the goal at the end is declared the winner, and in races with two or more players, remaining players have 60 seconds to finish; if 10 minutes pass before either player reaches the end, the race is declared a draw.

In team play, all members of a team must reach the goal in order to win. 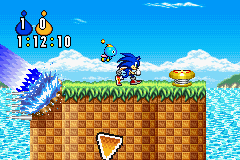 Another mode, which also requires each player to own a copy of Sonic Advance, is available to play. In this mode, up to four players play in one of four specially-created levels, and the objective is to collect as many Chao as possible within the time limit (3 minutes for individual play, and 5 minutes for team play). If a player has a Chao, other players can steal the Chao from that player by attacking them. When time is up, the player or team with the most Chao is declared the winner.

Item Boxes can appear at specific points in the level that can either make a player invisible to their opponents or to reduce their opponent's visibility. 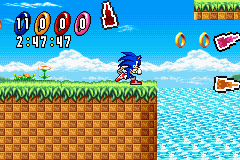 Another competitive game mode for up to four players is available to play, with only one copy of Sonic Advance required for the host player. Each player roams around a single confined stage, where the objective is to collect as many Rings as possible. Attacking a player with a Spin Attack or Spin Dash will make them drop their Rings, which can then be stolen by the other players. After three minutes have elapsed, the player with the most Rings is declared the winner.

Each player is designated a character in this mode. Player 1 is Sonic, player 2 is Tails, player 3 is Knuckles, and player 4 is Amy. Character-specific abilities are not available, with only a basic skill set (Spin Jump and Spin Dash) available for every character. Team play is not available for this mode.

NOTE 1: This game's Sound Test does not feature corresponding titles. Titles are made in relation to the next game in the series, which features such a Sound Test.

NOTE 2: There are additional entries beyond the regular maximum amount (42) that include unlisted music (especially from the multiplayer modes), empty tracks, sound effects and duplicates. The maximum range is 199; 200 and up crashes the game.

NOTE 3: There are a few tracks both used and unused (marked with an *) that are only accessible by hacking the game's memory. These include:

There is a mobile port created by Gameloft where you can only play as Sonic the Hedgehog and 3-4 Zones, depending on your device.