Gemerl[1][2] (ジーメル), also known as G-merl, is a robot created by Dr. Eggman who debuted in the Game Boy Advance game Sonic Advance 3. Gemerl would serve as a secondary antagonist throughout the game; Sonic and co. fight against him in Act 3 of Sunset Hill, Toy Kingdom, and Cyber Track; and also in the Boss Acts of Route 99 and Altar Emerald.

Gemerl bears a great deal of resemblance to (and derives his name from) Emerl, the Gizoid whose development forms the core of Sonic Battle's story. However, the precise nature of Gemerl's relation to Emerl is unknown. It is stated that Dr. Eggman created Gemerl from Emerl's "data"[2][3], which would seem to imply that Gemerl is merely an advanced Phi series robot. 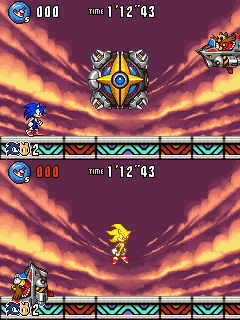 Having been created from Emerl's "data", Gemerl would repeatedly encounter Sonic and friends over the course of Sonic Advance 3, even to the point of merging himself with Eggman's many boss machines.

What happens to Gemerl varies depending on the ending achieved. If the player fails in their task to gather the seven Chaos Emeralds as Sonic, they'll have earned the bad ending. Having fumbled his last stand, Eggman attempts to flee the scene with Gemerl. The controlled character, as per usual, busts the doctor's Egg Mobile, causing it to careen into the abyss to the right. Gemerl himself lands at the edge of the precipice, and after hesitating for a brief second, decides to follow his master into the unknown below. Sonic and Co. don't seem too troubled by the apparent deaths of their adversaries, as the Master Emerald is seconds away from restoring the planet to its former glory.

However, if the player collects the seven Chaos Emeralds and beats Altar Emerald as Sonic, Eggman attempts to escape with Gemerl and spouts off his usual assurances of vengeance. Gemerl, however, strikes out on his own and attacks Sonic unawares, wrestling all the Chaos Emeralds from his grasp and using their powers to transform into Ultimate Gemerl. The beast escapes into space, but the Chaos Emeralds happen to fall back to earth, allowing Sonic to harness their power and transform into Super Sonic. Tossing aside their personal vendettas, Sonic and Eggman both pursue Ultimate Gemerl and take him down in Nonaggression.

An unspecified amount of time later, Cream and her mother find the original, damaged shell of Gemerl washed up on the beach. Tails uses his technical skills to repair the robot, resulting in a robot much more tolerant of carbon-based lifeforms. Gemerl is last seen having tea and frolicking with Cream, Vanilla, Cheese and the local wildlife, effectively taking the role of his fun-loving predecessor Emerl. Gemerl hasn't been seen in the video games since. 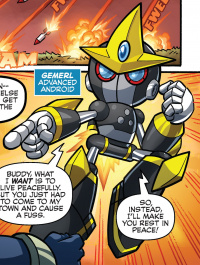 In the Sonic the Hedgehog comic series by Archie Comics, Gemerl would not make an appearance in the comic until the universe was rebooted after the Super Genesis Wave, wherein he is given a personality similar to that of the pre-Super Genesis Wave character Shard the Metal Sonic.

In IDW Publishing's Sonic the Hedgehog comic series, Gemerl's personality is different from his Archie iteration in that he is very devoted to protecting Cream and her family, even going as far as to go too far in his directive and attack innocents who appear to pose a threat to Cream. However, he can be reasoned with, prompting him to show regret for his actions and admit mistakes with his procedures. Gemerl uses a very robotic and computer-based speech pattern, similar to that of E-123 Omega.