Dragon Road and its hub town Chun-nan form the fifth area visited in Sonic Unleashed. The level is based on the Great Wall of China and has Sonic scaling giant dragons. There are several platforming sections on brightly coloured revolving wheels covered in Chinese-style patterns. Fireworks launch Sonic great distances; perhaps a tribute to the ancient Chinese invention.

The night Act Stage introduces the player to a slingshot like gimmick where Sonic pulls a pole towards himself and lets it propel him forward.

After exploring Spagonia and Holoska, Sonic is directed by Professor Pickle to search for a Temple of Gaia in Chun-nan. On arriving in the town, it seems that the village eldar, Zonshin, has gone missing; he went out searching for the village treasure lost during the earthquake that woke up Dark Gaia, and hasn't come back. Sonic and Chip agree to go search for him in Dragon Road Night Act 1.

Zonshin is found with the Dark Gaia Phoenix - guardian of the Chun-nan Gaia Temple, that went berzerk when Dr. Eggman sapped the Emerald's power. The Werehog defeats the phoenix, restores the red Chaos Emerald on the altar, and returns the eldar to the village.

Even after the planet piece is repaired, Chun-nan isn't out of the fire yet. Return in the day and the villagers report that now they're beset by Eggman's robots! Complete Dragon Road Day Act 1 to open the town back up and recieve the local's thanks a second time. 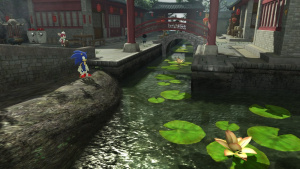 The daytime Entrance Stage in Chun-nan is where Sonic can find the Air Boost Shoes, enabling him to use Sonic Boost in mid-air.

Zonshen (ゾンシェン) - A walking treasure trove of medical knowledge who can supposedly cure any ailment. Unfortunately, much to his irritation, Zonshen's arms aren't quite long enough for him to cure his own chronic back pain. Zonshen is the village elder and the guardian of Chun-nan's Gaia Gate. Sonic and Chip had to rescue him from the Dark Gaia Phoenix and he later helped them in their mission.

Lin (リン) - A meat bun pro who has been serving them up for 90 years now. Technically, Lin is retired, having passed the extent of her bun-craft on to her only daughter, Jinlin. Decades of customer interaction have made her an excellent judge of character; she only needs one glance.

Shuifon (シュイフォン) - A painfully indecisive man who happens to harbor a secret. Someone dressed in black has been snooping around his house lately. Or maybe not; Shuifon is sort of hazy about the details.

Wang (ワン) - Lin's son-in-law, who works at the pork bun shop. The village's famous buns have always been whipped up by the ladies, who won't let him comes anywhere near the kitchen. Then again, Wang knows how strict Lin can be about her product, so he's perfectly content with being stuck behind the counter.

Jinlin (ジンリン) - Lin's only daughter, who has recently been initiated into the family meat bun business. Since then, she has been busy every day, churning out one bun after another. Jinlin's goal is to further evolve the craft before passing the shop down to her own daughter, Hualin.

Hualin (ワーリン) - Jinlin and Wang's daughter. Hualin was born into a family of bun-makers, and as you might imagine, she is thoroughly bunned out. She has switched to an all-vegetable diet ("for my complexion!" she says) in hopes of reversing a lifetime of meat bun damage while still of marriageable age.

Chun (チュン) - Zonshen grandson and a noteble meat bun consumer, who one day when he gets older, hopes to be a profesional Meat Bun critic who gets to eat them all day. Because of his Meat Bun Obsession Chun who grown exeptionaly (at least horizontally).

Yilin (イーリン) - For as long as she can remember, she has been obsessed with hide-and-seek. Yilin has been known to stay hiding for days at a time, so challenging her requires a special kind of fortitude.

Hot Dog Vendor - The manager of the Don Fachio hot dog mega-franchise's Chun-nan location. The sketchiest vendor in the biz, he freely admits to lacing his dogs with "secret herbs" for added nutrition and vitamins.

Even after the planet piece is repaired, Chun-nan isn't out of the fire yet. Day Act 1 sees Sonic clear Eggman's forces from the area. This level features a river gorge route where Sonic has to use Speed Drift and Sonic Boost simultaneously to navigate the winding waterways.

A 2.5D three-lap track where the course changes on each circuit. Make good use of quick spin jumps to get up onto faster and easier routes.

This act is composed almost entirely out of the giant spinning prayer wheels from day act 1. Be careful at the very end; just as you approach the Goal Ring, the final dash pad tries to launch Sonic into a bottomless pit!

The main Night act, this level sees Sonic fight his way through Dark Gaia's Minions to the Temple of Gaia and Dark Gaia Phoenix. The level includes several shallow water areas where Thunderballs can be used to electrocute other enemies.

This act is a key hunt, with the werehog having to employ various creative methods of getting keys to their appropriate pedastals. These include balance beam challenges and making good use of the extendo-arms - leaving keys on one side of a gap, jumping across, then retrieving them with a stretchy grab.

Although these areas are explorable in missions from Dr. Zongshen, they're blocked off by an invisible wall in the main level to the left of the goal ring. It is believed the level was shortened to keep the werehog's gameplay from being overly slow. The area has Sonic exploring ruins of a palace and includes a view of Chun-nan's Temple of Gaia, as well as the battle arena for Dark Gaia Phoenix. This area is accessible as Act 1-2 in the Dragon Road Adventure Pack.

The first Sonic Unleashed downloadable content is the Dragon Road Adventure Pack, which adds two new daytime stages, one new nighttime stage, and harder or extended versions of two daytime and one nighttime stage. It was released on Xbox Live for 250 MS Points on 5 March, 2009 and on the PlayStation Network alongside the Spagonia Adventure Pack for $3.00 on 16 April, 2009.

Day Act 4 is a platforming area with lots of revolving platforms. It's high above the ground, and has a lot of pits.

Night Act 1-2 is the second, unused half of Act 1. Notably, the end of the level features a Titan that breaks through a wall before the fight begins. The stage relies upon breakable walls.

Night Act 3 is a large platforming area on the outside of the Great Wall. There is comparatively little combat compared to other levels.