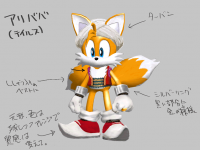 Ali Baba is an alternate reality version of Miles "Tails" Prower encountered by Sonic in the Arabian Nights world of Sonic and the Secret Rings. He looks identical to Tails.

He is first encountered in the Sand Oasis after being rescued from the minions of Erazor Djinn. He is later seen again after Erazor Djinn summons the Ifrit Golem and announces that Sonic only has half his life left. They go to Ali Baba where he explains that his friend Sinbad may be able to help them. He is seen again when Sonic and Sinbad are fighting and questions the ability to gather enough water to put out a fire genie.

At the end, he had apparently gone on many travels with Sinbad and Sonic until the blue hedgehog returned back to his home.