Espio the Chameleon (エスピオ・ザ・カメレオン) is a recurring character in the Sonic the Hedgehog games and related media. Introduced to the Sonic series in Chaotix in 1995, Espio is a member of the Chaotix Detective Agency with Vector the Crocodile and Charmy Bee. In Sonic Heroes and subsequent outings, Espio has taken the role of a calm, disciplined ninja, well-versed in concealment and wielding the largest shuriken known to man.

Espio's name is believed to derive from "espionage", or the Spanish word "espio", which literally means "I spy". There are some indications that Espio may have originally been intended as the main star of his debut game, Chaotix, on account of "STARRING ESPIO THE CHAMELEON" appearing in the title cards on various beta builds of the game.

Takashi Iizuka, director of Sonic Heroes, stated that he felt he had 'reinvented' the Espio and the other members of Team Chaotix for their 2004 return. Espio's change of age and design, along with his more serious attitude to that implied in other pre-Heroes media, lends some credence to this.

Espio has appeared in the following Sonic games: Espio's first appearence, being rescued by Knuckles on Isolated Island.

Espio's debut in Chaotix gives a different story to the chameleon in the Japanese versus the English manuals. The former doesn't actually mention Espio (or any of the rest of the Chaotix) at all, but relates that the Chaos Rings - lost for eons on the sea bed - underwent some kind of remote reaction with the Master Emerald thanks to the descent of Angel Island in Sonic 3 & Knuckles. A new landmass has been raised out of the sea, which Dr. Robotnik swiftly seizes and converts into Newtrogic High Zone. Knuckles goes to investigate, and there finds the Chaotix, who presumably are likewise investigating.

In the English manuals, Knuckles is (for some reason) the security guard of "Carnival Island", and Robotnik is trying to drain the park's power because he apparently doesn't want to pay for his own electricity. The fat man captures Knuckles' "friends" in the Combi Confiner, and it's up to the echidna to free them and chase Robotnik off.

While Chaotix and Sonic the Fighters didn't give any of their protaganists much in the way of characterisation, in Heroes Espio is firmly established as a serious and sceptical ninja, working with Vector and Charmy as part of a rather venal detective agency. Previously of no fixed residence - like most of the rest of the cast - Team Chaotix' story shows that the detectives are based in a single-storey shack in the middle of a stagnant swamp. Which raises the question of how they expect to get any business at all.

Espio's cool and businesslike nature makes him the one straight man of Team Chaotix, having to put up with the rather more anarchic capering of Charmy and their nominal boss, Vector. Suspicious and level-headed, the chameleon isn't afraid to voice his opinion that when things look too good to be true, they usually are, though his complaints are generally ignored by his team-mates when the prospect of profit rears its head, and Espio finds himself dragged along on another madcap moneymaking scheme.

His ninja skills - and Chroma Camo ability to turn invisible - make Espio an invaluable asset to the Chaotix's detective work. The chameleon is rarely fazed by anything, and doesn't let his emotions show even amongst friends - which can be a blessing, as his level-headedness helps prop up Shadow during their fight against the Egg Breaker. Espio is often just as secretive in conversation as he is in a fight, unwilling to share information about Team Chaotix's investigations even with nominal allies like Sonic and Tails unless it's absolutely necessary.

Although Vector's "Any work that pays" philosophy has lead to Espio and his comrades working with or even for Dr. Ivo Robotnik on more than one occasion, the chameleon harbours an extreme personal dislike of the fat man himself. One can presume that most Sonic characters dislike the evil doc, but Espio's particularly strong loathing of Eggman is stated in the Japanese Chaotix manual. He's careful to place this aside when on an investigation, however, remarking during Shadow the Hedgehog that his disagreement with the Doc is purely business - at least this time.

Espio first appeared in Chaotix. The chameleon is the first member of the Chaotix encountered by Knuckles, after he's saved from Robotnik and Metal Sonic on Isolated Island. Espio has a variety of unusual moves in this game. He can walk up vertical surfaces, his idle animation sees him cycle through a range of different colours, and he does a spinning-top move in place of the spin dash (although in Heroes he is shown as able to perform the standard spinning-ball move). Along with Knuckles, the rest of Chaotix, and the dubious robot renegades Heavy and Bomb, Espio fights to free Newtrogic High Zone from the Doctor and the Chaos Ring boosted Metal Sonic Kai.

Espio appears as a playable character in Sonic the Fighters. It isn't quite known if Espio is attempting to save the world from the Death Egg II because he is getting paid to do it, or if it's because he just simply wants to save to world and be a hero, considering how the title screen demo asks the question: "Who will save the world?".

For moves, Espio uses his own unique spindash from Knuckles Chaotix, as well as his far reaching tongue. While many of Espio's moves appear to be crude and unprofessional, he shows considerable talent with both normal karate chops and his special backhand chop. This may have led to Espio's development as a ninja in later Sonic games.

In arcade mode, Espio is the fourth character that the player must defeat in order to reach Death Egg II. Espio is the holder of the (darker) purple chaos emerald in this game. He presumably uses it to perform the Espio warp while in hyper mode. This move allows the player to warp Espio close to, or behind his opponent, in a similar fashion to Chaos Control. The eight-year hiatus after Fighters ended when Sonic Heroes reintroduced Espio, along with Vector and Charmy (though Mighty the Armadillo was conspicuous by his absence). Now the trio are explicitly described as a detective agency, a profession not mentioned in Chaotix, though it had featured heavily in their portrayal in Sonic the Comic in the intervening years.

In Team Chaotix's opening sequence, they receive a parcel containing a radio transceiver. The garbled voice on the other end hires them for a job - and promises to pay handsomely. Espio is naturally suspicious, but his objections are overridden by Charmy and Vector, who have dollar signs in their eyes. After fighting their way through the Eggman Empire for an entire game, it transpires in Final Fortress that the voice at the end of the radio was Dr. Eggman himself, imprisoned by Neo Metal Sonic inside his own flagship. Duty-bound, the Chaotix free the fat scientist, although he ends up not paying them anything after Metal Overlord wrecks the Eggman Fleet.

Espio is the team's Speed Type member; the same class as Sonic, Shadow, and Amy. He's shown as able to play the samisen, this Japanese banjo being his instrument during Team Chaotix's "Team Blast" move. But given the horrible cacophony the trio create during the move, it's questionable whether or not he can play it well.

Appearing as one of the 2P-controllable partner characters, Espio accompanies the player in Mad Matrix. Throughout Shadow the Hedgehog, the eponymous Shadow encounters Team Chaotix a number of times during the Black Arms invasion. Vector mentions that they're pursuing a "big case", although who or what they're actually after is never specified. With Shadow's assistance, Espio gets into Eggman's VR mainframe, seeking to gather up some fragmented data for their investigation. The two of them are discovered by the Doctor, and fight the Egg Breaker.


Later, in the Last Story, Espio (accidentally) hacks the ARK computers to broadcast a decades-old message from Professor Gerald Robotnik. This re-invigorates Shadow on the Black Comet, enabling him to fly off and fight Devil Doom. 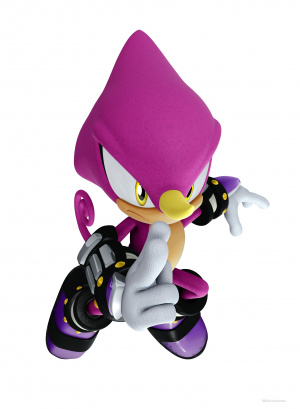 Espio appears without his Team Chaotix comrades in Sonic Rivals 2. At the start of the game, Vector contacts him with orders to go undercover and investigate Silver the Hedgehog, whose involvement the croc suspects in a recent spate of chao disappearences. However, Espio is gradually convinced of Silver's innocence in Blue Coast Zone, and the pair work together to recover the little blue creatures. In Sunset Forest Espio ends up trying to chase down Tails, the fox having picked up some of Professor Gerald Robotnik's notes that the detective wants. Neon Palace Zone pits Silver and Espio against Knuckles and Rouge, who have picked up some chao almost by accident. Sonic and Tails stand in their way in Frontier Canyon Zone, as Espio searches for rings to recharge Silver's psychokinesis.

A great number of Sonic's friends find their way into the Amazing Interstellar Amusement Park in the DS version of Sonic Colours; Team Chaotix numbering amongst them. Sonic and Tails run into the trio on Planet Wisp. While Espio is characteristicly circumspect about his motives there, Vector eventually lets the cat out of the bag: they're up in the Park on a bounty hunt for the Doctor himself.

In the Archie comics, Espio is a bona fide hothead, which causes friend Charmy to remind him of his manners.

In Sonic the Comic, he is a friendly (or sometimes not so friendly) rival to fellow Chaotix member Mighty.

Espio appears working in the Casino Night while Knuckles the Echidna was brought there against his will to fight.