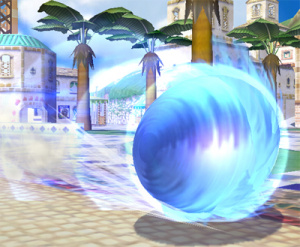 In 2D side-scrolling games, the move is performed by holding The most famous form of the Spin Dash debuted in Sonic the Hedgehog 2, and is usable in all subsequent 2D games. Holding

Sonic the Hedgehog CD was released after Sonic 2, and so technically marks the move's second appearance, but here it functions differently to the version in the latter game and subsequent 2D titles. Revving up does not confer invulnerability to attack, and must be completed by holding Jump for a sufficient time, otherwise Sonic will just stand up instead of dashing off--which, in any case, he always does at the same speed, because the launch speed is not scalable.

In the 2011 remaster, the player is given the option to choose between this type of Spin Dash and the Sonic 2 version.

+Special Move, then launched by releasing the buttons, causing Sonic to make a short hop as he dashes. The Spin Dash is also his down special move, but this variation is called the Spin Charge, and is charged by holding

and repeatedly pressing the Special Move Button, much like in traditional Sonic games, and does not make Sonic do a small hop.