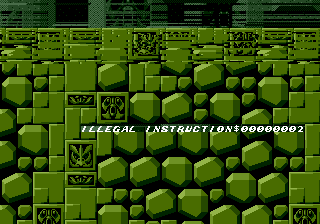 A more catastrophic example of a bug, which has caused an illegal instruction in Sonic 1's Labyrinth Zone.

A bug, sometimes referred to as a glitch, is a term generally used to describe programming faults or mistakes in computer/console software or systems. Bugs can range from very minor oddities, such as a palette or animation error or a short-term quirk in gameplay, to more serious cases such as a massive decline in performance or a crash. Some bugs may not be apparent, often requiring the player to go out of their way and do things the programmers likely wouldn't have expected the player to do.

Games in the Sonic the Hedgehog series are often infamous for having numerous bugs of varying numbers and severity, with bugs in games such as Sonic the Hedgehog 2006 and Sonic Boom: Rise of Lyric often being a result of poor programming. However, even polished games such as Sonic the Hedgehog 3 & Knuckles and Sonic Mania can still have plenty of bugs. Some bugs in a game are fixed in later regional/revisional releases or, in the case of more recent games, official patches distributed online by Sega. Members of the Sonic community have also created fixes for bugs, some of which have been documented in the Sonic Community Hacking Guide How-tos.

Whether they are minor or game-breaking, they are all documented in the pages under this category. To add a bug to a page, use the Bug template.

The following 34 pages are in this category, out of 34 total.