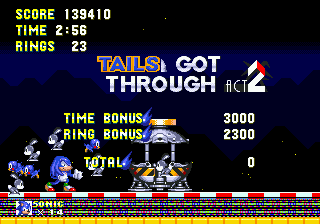 Tails got through Act 2?! Blue Knuckles fighting one of the bosses in Launch Base Zone
Blue Knuckles is the name informally given to a character which can be obtained in Sonic & Knuckles, Sonic 3 & Knuckles and Sonic & Knuckles Collection by hacking the ROM or simply by using Game Genie / Pro Action Replay codes. His internal character ID is 04 so the most common way used to play as him is to use the FFFF0A:0004 code (Game Genie: AX99-8AAL) in the Gens emulator, but if you use a Disassembly you can follow this How-to Guide and "fix" Blue Knuckles permanently in the game.

He plays like regular Knuckles, though he uses Sonic's palette and Sonic's life counter in the HUD. Although he can complete several levels just fine, many glitches usually arise, especially when it comes to levels in which there are Sonic-specific or Knuckles-specific paths, as it's possible to get stuck and/or to be unable to trigger certain level events. To add even more confusion to the mix, he is referred to as Tails in the "(character) Got Through" text at the end of each act (as pictured). The result screen is often glitched as well, with random garbage tiles appearing all over the screen.

Super Blue Knuckles flashes yellow just like Super Sonic; interestingly enough he reverts to red once the super transformation is gone, and he'll stay red up to the next zone, unless he dies. Hyper Blue Knuckles flashes all the colors of the Chaos Emeralds just like Hyper Sonic; he has (glitched) afterimages and he can breathe underwater like the other hyper forms in the game (Hyper Sonic and Hyper Knuckles). Once again, he reverts to red once the hyper transformation ends. However, obtaining Hyper Blue Knuckles by placing and breaking an S monitor via debug will result in an intermediate form between Super and Hyper, as he will have the glitched afterimages, but he will just flash yellow and he won't be able to breathe underwater.

Finally, Blue Knuckles makes an appearance on the signpost at the end of act 1s in Sonic 3.