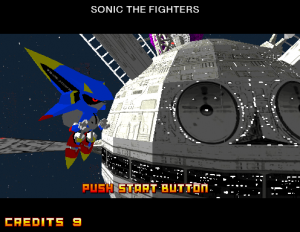 Rocket Metal, occasionally referred to as Mecha Sonic Model No.29, is a transformation of Metal Sonic which features briefly in Sonic the Fighters. Appearing first in the introductory cutscene, Rocket Metal sports extended spines and the ability to further transform into a torpedo-shaped rocket. Although he is seen nowhere in normal gameplay, hacking has revealed that Rocket Metal is a fully functioning character; there's just no way to access him without modifying the game's code.

While Metal Sonic is never shown transforming directly into Rocket Metal during the game, he does transform into the same torpedo as a special move, lending credence to the premise that the two robots are indeed one and the same (together with the colour scheme and similarities to Neo Metal Sonic).