ChocolaMedia:SonicHeroes GC US manual.pdf[1] is a brown Chao with a blue bowtie and the twin of Cheese, who is friends with Cream the Rabbit.

Chocola goes missing in Sonic Heroes, which begins Team Rose's quest. A newspaper article shows Chocola and Froggy being kidnapped by Sonic the Hedgehog. However Chocola was really captured by Neo Metal Sonic disguised as Sonic, which Team Rose doesn't find out until the last story. Precisely why Metal Sonic requires Chocola is unclear, as Chaos' data is presumably embedded in Froggy (following the amphibian's misadventures in Sonic Adventure) rather than the Chao. Regardless, after defeating the Egg Emperor, Team Rose recover both Chocola and Froggy from a puddle of liquid metal, apparently none the worse for wear.

Chocola is referenced in Lego Dimensions. While in the Sonic the Hedgehog Adventure World, when Amy is listing off a couple of her accomplishments, she goes on to bring up how she helped save Chocola and Froggy. This is the first time Chocola has been mentioned in a game since Sonic Heroes. 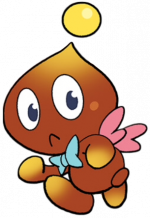 Chocola in the IDW comics. Drawn by Tracy Yardley.

In the Sonic the Hedgehog comic series and spin-offs from Archie Comics, Chocola originally lived with the other Chao at the Chao Garden adjacent to the Cream and Vanilla's estate in the Southern Baronies until the estate was attacked and the Chao Garden ruined by Snively. Amy rescued Chocola and their fellow Chao, and relocated them to New Mobotropolis. After the Super Genesis Wave altered Sonic's universe, Chocola's past changed to be the same as in the video games, and the Chao resided with Vanilla and Gemerl.

In the Sonic the Hedgehog comic series from IDW Publishing, Chocola lives in Floral Forest Village with Cream, Vanilla, Cheese and Gemerl. He would become infected by the Metal Virus along with their twin in issue #18, but both of them are cured in issue #29.