The Biolizard (バイオリザード), code-named Project Shadow and also known as the Prototype of the Ultimate Life Form, was created by Professor Gerald Robotnik about fifty years before the Sonic Adventure 2 storyline. It appears as a giant red and black lizard with a contraption on its back and with tubes running down the neck to the sides of its mouth. It cannot move well, but is able to take damage, manipulate gravity and energy, use Chaos Control., regenerate any lost limbs and can reproduce asexually. However, to be able to sustain itself, it requires the Life Support System, fuelled by Chaos Drives.

It was designed to be the ultimate life form as part of the government research for immortality, which Gerald Robotnik was part of as well. The prototype of the ultimate life form was made after the image of a lizard and it was able to regenerate, restore lost limbs and reproduce asexually to sustain itself. However, it reacted violently when it had the power of the Chaos Emeralds, and it quickly became unruly and hard to control, causing many problems. Others questioned the project’s continuation and eventually, the higher ups sent GUN to dispatch everyone who knew about Project Shadow on board of the ARK.

Meanwhile, the Biolizard was encapsulated and it remained in suspended animation until Sonic the Hedgehog and his crew came to ARK. It was awakened as Sonic and Knuckles reach the Eclipse Cannon’s core. Shadow, previously convinced by Amy to help the Earth then appeared and fought it instead, allowing the pair to continue their way towards the artificial Master Emerald altar behind it. After being defeated the Biolizard used Chaos Control to warp away, and even though Knuckles had stopped the Chaos Emeralds, the Biolizard seized control of the Colony by becoming one with it and keeps it on its' crash course to Earth, becoming Finalhazard. Using the Chaos Emeralds Sonic and Shadow became Super Sonic and Super Shadow and fight the Finalhazard. It's not done in time however, so Shadow uses Chaos Control as a last effort to transport the whole thing back to a non-falling position and it is presumed that he lost his life in the process.

The Biolizard appears most significantly in this game but even so, most of the information and back story is given in supplementary material. The only clue he exists in Sonic Adventure 2 as nothing but a surprise boss are two instances in Dark Story, the first when Rouge searches for Project Shadow in the ARK's computer, where she finds something else but Shadow on the classified info, and again when she confronts Shadow about this same information later on the story.

As said before, the Biolizard appears to block Sonic and Knuckles path and is stopped by Shadow, only to warp away and become Finalhazard.

The boss arena is toroid shaped, with the Biolizard sitting in the middle. There are two streams cutting it off in two, one closer to the artificial Master Emerald altar shrine and the other to the pool where Sonic’s Cannon's Core ended at. The former is harmless, but the latter will sweep Shadow off his feet and functions as a bottomless pit of some sort if he doesn’t jump out almost as soon as he touches it. The Biolizard cannot move well so it only shuffles about rotating on its axis. The surface of its skin is designed to be absorb attacks, so using the Homing Attack will have no effect (sometimes it won’t even hurt Shadow, just bounce him off).

The first attack consists of trying to get closer to Shadow, biting him if he’s closer to its mouth or trying to whack him with its tail, if he moves away from the head too much. Around one half turn the Biolizard tires out and stops to gather its breath. The pipes that run from his mouth to its life support system glow, probably because its draining some energy from there. Shadow can grind these up to reach the glowing top and hit it, as this is the Biolizard’s only weak point. This is all the Biolizard ever does in his first stage while he isn’t hit.

After chasing him a bit some more, the Biolizard will use the energy attack, where it spits homing black matter spheres. It will take Shadow’s height at the moment of spit into consideration, so there are two heights possible, one lower and one higher. Either way, these can be avoided by very quick movement (albeit it doesn’t last), jumping over the lower ones or using the summersault to overcome the higher ones. It always spit eight energy balls, regardless of height and it will nicely wait for Shadow to compose himself if he’s hit before spitting. As this attack ends the Biolizard tires out again and Shadow can grind up the tubes to attack him once more. This pattern is repeated.

The third attack consists in another chase and another energy attack, but eventually the Biolizard will rear up and use the egg-like attack. The Biolizard creates several pink spheres that are assumed to be the way it reproduces itself and these will float about in a cloud around him, homing on to Shadow one after the other. Shadow can use his own Homing Attack on them to bounce higher and then hit the life support system. This pattern is also repeated.

The Biolizard will rear up and generate pink spheres once more, but this time it's capable of controling gravity around him (at the very least), so the eggs and Shadow will all float in a disc surface in the same plane of the life support system. The objective is to navigate Shadow through the eggs (they swirl slightly anticlockwise) towards the life support system.

After the six hits, the Biolizard slumps in defeat.

The Biolizard is seen in Shadow the Hedgehog, where Shadow reminisces its defeat and death at the end of Sonic Adventure 2. It’s unknown whether it has Black Doom’s DNA or not, but it’s significant to notice that the black and red colour scheme and battle cry of the Black Arms and Devil Doom is similar, albeit the latter is quite similar (if not the same) to Perfect Chaos. 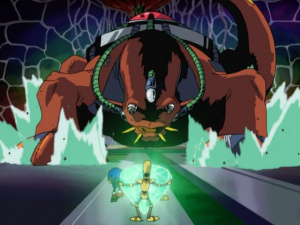 The Biolizard, as seen in Sonic X's adaptation of the Sonic Adventure 2 storyline.

The Biolizard appears in episode 38, Maria's Request, Everyone's Request (EN: Showdown in Space). He also appears as part of the Japanese DVD sleeve for volume 10. He serves the exact same purpose as in Sonic Adventure 2. It’s worth noting that even the attacks and way to defeat is the same, as the Biolizard uses the same pink egg attack and Shadow uses the homing attack to defeat it.