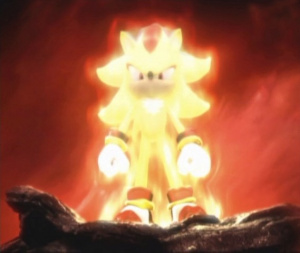 Super Shadow is Shadow the Hedgehog's Super State which he first used in Sonic Adventure 2. When in this state, Shadow's black originally became a metallic champagne color, but in more recent appearances it becomes a bright lemon cream color. His red highlights remain the same.

While in his Super State, Shadow is able to use all of his normal abilities, including Chaos Control and Chaos Blast. His Chaos Spear ability is also more prominently used. He is able to fire multiple smaller shots at various speeds, and a single high powered shot as well. Super Shadow can also used the same charged dashes that Super Sonic uses. His defense is increased to the point where he merely loses fewer rings per hit.

Shadow becomes Super Shadow for the first time at the end of Sonic Adventure 2, as he and Sonic must team up to defeat the Final Hazard. Throughout the fight, the player hears comments from Sonic that indicate Shadow is losing his strength, and even Shadow himself admits he's having difficulty retaining such power. After the battle with Final Hazard, Super Shadow and Super Sonic use Chaos Control on the entire space colony ARK, saving the Earth from the collision. However, Shadow, in his already weakened state, uses the rest of his strength to do so and falls to Earth. It is at this point that Shadow is found by one of Eggman's robots and sealed in a capsule, thus allowing the events of Sonic Heroes to take place.

While he sat out Heroes, Super Shadow was next seen in his own game, Shadow the Hedgehog. In traditional post Sonic Adventure fashion, Shadow goes super in the final battle to battle a transformed Black Doom.

Super Shadow's most recent canon game appearance is in the 2006 Sonic the Hedgehog game. Here Sonic is awakened from death as Super Sonic, and transfers Chaos Emerald energy to Shadow, and Silver (in a similar fashion to the final battle of Heroes) which enables them both to become super.

Super Shadow is Shadow's All Star Move in Sonic & Sega All-Stars Racing. He uses Chaos Spear on his opponents as he charges by.

In other media, Super Shadow appears in Sonic X in both the Sonic Adventure 2 arc, and the Metarex arc. He also plays a role in the American Sonic the Hedgehog comic series. 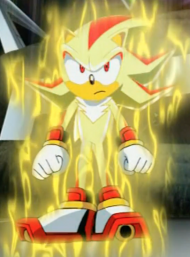 Super Shadow as depicted in the series Sonic X.