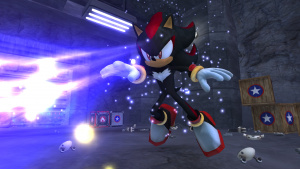 Shadow launches the move in Sonic '06.

Chaos Spear is a move used by Shadow the Hedgehog, and powered by his Chaos Control ability. The move allows Shadow to create bolts of energy and fire them at nearby, or distant opponents. The move was first used in Sonic Adventure 2.

As a Distance Attack

In Sonic Adventure 2, players can only use the Chaos Spear in multiplayer. By default it is enabled when players collect multiples of 40 Rings. This can be altered by the handicap option in Sonic Adventure 2 Battle. It was also available to Metal Sonic for a short period. Once sufficient Rings are collected, the player can simply press the action button (

) to use the move. Shadow will have a momentary close up while he uses the move, and a yellow lightning bolt will come out of the sky and cause the opponent to take damage. If the opponent has invincibility enabled, they will take damage when the power up runs out.

In Sonic and the Black Knight during the Deep Woods mission Lancelot Returns, Lancelot can use a move called Agility which are exactly like Shadow's Chaos Spears (only Lancelot's are red). Lancelot has a wide variety of swords that allow him to use this move, the Chaos Spears automatically appear when Lancelot swings his sword. During the "Lanceot Returns" mission, Lancelot manefests the spears and launches them at Sonic, although in doing this he leaves himself vunerable to Sonic's Soul Surge.

The 2006 Sonic the Hedgehog saw the first uses of Chaos Spear as a regular gameplay move (though it was used in normal gameplay beforehand, it was limited to Super Shadow). Shadow can use the move to stun nearby enemies. Players can simply jump and press the action button. By holding the action button, players can charge the move, and hit multiple targets.

There was a glitch in beta versions of the game where players could continually use the added jump height from Chaos Spear to gain altitude. This was fixed for the final version.

By fulfilling certain conditions, players can enhance the strength of the Chaos Spear.

In Shadow's self titled game, Chaos Spear can only be used in the final battle as Super Shadow. There jumping is not required, and players can press the shooting button to use the move. This effectively made use of the game's gunplay mechanic in a mode where it would otherwise be unavailable. Additionally players can enhance the power of the move. By holding the shoot button, players can charge the move, and launch it at varying degrees of power. At full power, Shadow's hand will begin to glow. Aside from Chaos Blast, this was the only way to damage Devil Doom.

In the 2006 Sonic the Hedgehog, players could upgrade the Chaos Spear by purchasing the blue "Memory Shard" upgrade. If players activate Shadow's "Chaos Boost" at its second level, "Chaos Spear" then becomes the "Chaos Lance". The move can now destroy enemies instead of just stunning them. Like Super Shadow's Chaos Spear in the previous game, the move can be charged to increase its power and hit multiple targets.

In addition to buying Memory Shards, players can upgrade the Chaos Spear even further by becoming Super Shadow. The Chaos Spear then becomes the "Spear of Light". It is still used by pressing the action button. However, it can be charged by holding the Right Trigger button. The longer the button is held, the more spears Shadow will launch. The Spear of Light has the fastest recharging times in the Solaris battle, making Shadow the best character to use in the second phase.

Shadow is shown to use Chaos Spear in media other than the games as well. Featured in both Sonic X and the American Sonic the Hedgehog comics, Chaos Spear is used in similar methods to the games.