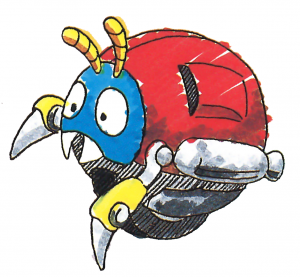 In the UK (Egmont Fleetway) Sonic the Comic, all early Badniks were powered by Organic Batteries, the name given to the helpless Mobians trapped inside; however, stronger self-sufficient Badniks known as Prime Badniks which could operate without the need of such batteries soon appeared. The first such was the Arachbot: a spider-like Badnik that captured Tails in an early issue and that was resistant to Sonic's attacks until he torched it using the weapon from another Badnik he had destroyed. Most Badniks continued to use organic batteries, with the exception of Troopers and some special project Badniks such as the Metallix. In earlier episodes, Dr. Robotnik used mobile factories, which were basically large Badniks that injested a Mobian, turned it into a robot, and then released it as a Badnik; in later stories, Robotnik used huge processing plants to churn out Badniks in large numbers.

All the Badniks on Mobius were immobilised in issue #100 along with all the electrical systems on Mobius, including Robotnik's Organic Computer on the Floating Island (but not the Floating Island itself or its ancient Guardian Robots), when Super Sonic burst out of the Black Asteroid in Mobius' orbit, transported from the Special Zone by the Omni-Viewer, causing an electro-magnetic pulse that covered the planet. Robotnik created a new batch from his new base on Flickies' Island, but never regained control over the planet again.