Metallix is a catch-all term for robotic versions of Sonic the Hedgehog, Porker Lewis and Knuckles the Echidna in Fleetway's Sonic the Comic. The original Metallix is analogous to Metal Sonic, first introduced in Sonic the Hedgehog CD. The Metallix name was thought up by editor Richard Burton, though writer Nigel Kitching intended to use the name "Metallico"[1] - why the character was renamed from Metal Sonic is still unclear.

Teased in previous issues as early as issue #22, Metallix was finally introduced in issue #25, kicking off an adaptation of Sonic the Hedgehog CD. A Metallix travels to Never Lake and captures Amy Rose, forcing Sonic to set off to rescue her. On arrival, Sonic is attacked by his robotic duplicate, who after a short fight escapes with Amy Rose to the Miracle Planet.

Sonic gives chase and arrives on the Miracle Planet for round two. The planet is covered in Dr. Robotnik's machinery which Metallix uses to get the upper hand, but when all seems lost, the Metallix is hit by a smaller Sonic who claims he's from the future. What follows is a series of events where the present Sonic, making use of a Time Stone, travels to the past, undoes Robotnik's work, and creates a good future, with Metallix fading into nothing and the Miracle Planet being restored.

The original Metallix briefly returns in issue #129, where Dr. Robotnik, after having absorbed the power of the Chaos Emeralds, has gained the ability to alter reality. Metallix is brought back to life to fight Sonic, alongside Megatox, Plasma, Commander Brutus and Metamorphia. They are all destroyed when Sonic knocks Brutus into Plasma, causing Plasma's electrical make-up to be disrupted and shock all the villains in the resulting chain reaction. 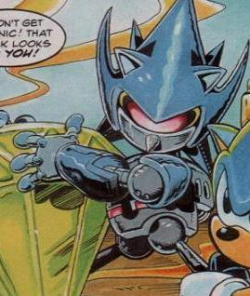 A second, upgraded Metallix design was introduced in the comic's adaptation of Sonic & Knuckles, fulfilling a role given to Mecha Sonic in the game. Debuting at the end of issue #49, both Sonic and Knuckles encounter it stealing the Master Emerald, and subsequently do battle in Sky Sanctuary Zone.

This Metallix draws power from the Master Emerald (similar to Super Mecha Sonic, but without changing colour), knocking Knuckles out in one hit while seeking revenge on Sonic for the death of its "brother". Quickly running out of power, it attempts to return to the Master Emerald for a recharge but is beaten there by Sonic, who after turning into Super Sonic, proceeds to tear the new Metallix limb from limb (and then starts attacking Knuckles, because Super Sonic is uncontrollable in STC).

While seemingly loyal to Robotnik, the Metallix plants the first seed of the next story, suggesting the first Metallix was "only one of an elite brotherhood of Badniks". This specific design would not be seen in the comics going forward, however.

The Brotherhood of Metallix 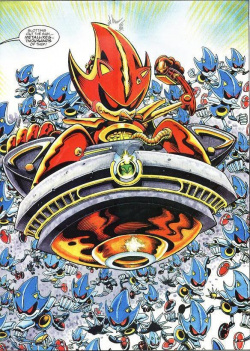 The Brotherhood of Metallix, with their emperor in the lead. Drawn by Richard Elson.

Just a few weeks later in issue #54, two (original) Metallixes are seen flying out of Robotnik's old "Egg Fortress" base in the Special Zone. Knuckles, who had accidentally arrived in the Zone, encounters them alongside the Chaotix Crew - the duo successfully managing to capture the Omni-Viewer before escaping. Troubled and now stuck, Knuckles and the Chaotix venture off to Robotnik's old base in search of answers.

It is revealed that the two Metallixes are working for a much larger "Emperor Metallix", and that by capturing the Omni-Viewer, the Emperor has devised a way for the "Brotherhood" to freely travel through space and time. Knuckles and the Chaotix enter the Egg Fortress and after a fight with a Metallix, are led to the Emperor by Nack the Weasel, who has betrayed the group by giving the Brotherhood the Omni-Viewer access codes.

More Metallixes arrive only to attack Nack alongside the rest, but after a short battle Knuckles is able to "total" them all with a device carried by the Weasel as a back-up plan. Rescuing the Omni-Viewer, Knuckles returns to Mobius, but it is revealed at the end of the story that the Emperor is both unharmed and now possesses a copy of the Omni-Viewer.

Issue #59 sees the Brotherhood put their plans into action. While attempting to capture Sonic the Hedgehog, Robotnik and Grimer are interrupted by a Metallix using the copied Omni-Viewer, who pulls Grimer into the Special Zone. Discovering that the Egg Fortress is not producing the ultimate loyal Metallix as planned, the fully functional Emperor Metallix reveals that they require Grimer's help to create a source of power - the same used on the Miracle Planet to power the first Metallix (revealed to be primarily Grimer's design). Grimer creates the "Alpha Device" and the Emperor prepares to travel to the Miracle Planet.

Having formed a temporary truce with Robotnik, Sonic reluctantly travels to the Special Zone by Star Post and steals the Alpha Device from the Brotherhood. But by using Grimer as a bargaining chip, the Metallixes get their way and leave through their copied Omni-Viewer. Sonic manages to return to Mobius and, along with the other Freedom Fighters, travels to the Miracle Planet to stop the Brotherhood. Working together, they are able to trick the Brotherhood and seemingly blow it up. Porker Lewis disables the now-activated Alpha Device, but as Mobius begins to fade, Sonic, Amy and Johnny Lightfoot begin crossing the chain so as not to get stuck. Porker follows but spots the damaged Emperor attempting to reactivate the device - he turns back and becomes trapped for a month.

The Miracle Planet returns in issue #67, where Sonic has travelled alone to meet Porker, who is seen crossing the chain back to Mobius. However, the Chaotix Crew drop in, having followed a trail to the Brotherhood of Metallix, with the Omni-Viewer revealing that the Freedom Fighters have failed. With the Miracle Planet now resembling the head of a Metallix, Sonic and the Chaotix head up until it is revealed that the Porker they have found is itself a Metallix. Fighting and defeating the Porker Metallix, Sonic discovers the real Porker tied up and the Emperor Metallix, who reveals that they have travelled back in time and altered history, turning Mobius into "Planet Metallix".

Escaping through the Omni-Viewer, Sonic and the Chaotix travel to the now dystopian Mobius to take stock of events, and after a chance encounter with Dr. Ovi Kintobor, determine that the Metallixes have stopped the creation of Dr. Robotnik. The team follow the same path through time as the Metallixes, and discover that to achieve their aims, the Brotherhood removed the rotten egg from Kintobor's fridge, preventing his transformation. In order to correct the events, Sonic is forced to return the egg and create his nemesis.

The Brotherhood of Metallix story remains a favourite among Sonic the Comic fans for its fresh take on the Metal Sonic formula (as well as the closest STC got to adapting the Chaotix video game). It is also thought to have been heavily inspired by the Daleks from Doctor Who - a "Dalek Emperor" commanding a destructive race of creatures was first seen in the 1967 Doctor Who serial The Evil of the Daleks. 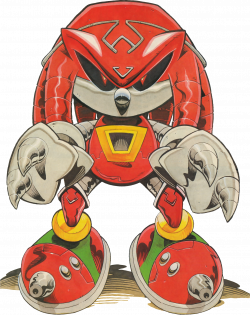 Having failed to both destroy Sonic and control his creations, Grimer conceived an entirely new replacement Metallix model based on Knuckles the Echidna rather than Sonic. Teased as early as issue #72, the Knuckles-based Metallix debuted in issue #108, being completely loyal to Robotnik and able to easily subdue Sonic.

Having been taken to the homeworld of the Drakon Empire, Sonic was sentenced to "Trial By Combat" for destroying a Drakon Sentinel in issue #29. This model of Metallix was chosen to be Sonic's combatant, and again quickly got the upper hand against Sonic, though the model's lack of speed meant Sonic could prolong the battle. Tails, having taken out a guard to gain access to the arena, allowed Sonic to escape, with the pursuing Metallix being decapitated by the closing door. Sonic's victory meant he was allowed to return to Mobius, while Robotnik remained with the Drakons.

More Knuckles-model Metallixes were built, but not activated. Grimer later used one to briefly capture Sonic in issue #139 so he could learn the whereabouts of Dr. Robotnik - by reading Sonic's mind and staging the Metallix's destruction, Sonic was able to walk away believing he had beaten the Badnik. This marked the last appearance of a Metallix in Sonic the Comic.

The Knuckles model is much the same as the Sonic one, complete with a chest death ray, though it sacrifices speed for power. Amusingly, it continues the STC theme of putting versions of Knuckles in the wrong coloured shoes - yellow socks stemming from palette limitations in the Sega Mega Drive game, Sonic the Hedgehog 3.

While one might assume this design was based on Metal Knuckles from Sonic R, Grimer's original hint in issue #72 was printed in February 1996, almost two years before Sonic R's release.