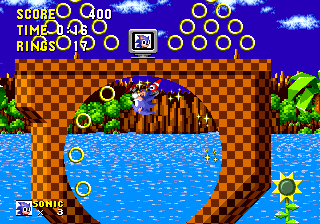 RingsMedia:Sonic1 MD US manual.pdf[1] (リング)Media:Sonic1 MD JP manual.pdf[2] are collectable items found in most Sonic the Hedgehog games. Typically large, golden and accompanied with a distinct collection sound, they are perhaps the most recognisable element of a Sonic game other than Sonic himself.

Perhaps the primary reason for collecting Rings in the original Sonic the Hedgehog is for points. If Sonic finishes a Zone with Rings in hand, the number collected will be multiplied to create a "Ring Bonus", which is added to the player's score. The concept of arcade-style "scoring" has become less widespread in more modern video games, however most Sonic games continue to reward the player in some way for finishing a level with Rings.

If a character is holding at least one Ring, this acts as a hit point, preventing death at the hands of enemies or obstacles. In the original game, if Sonic is hit by something dangerous (while not protected with a Shield), he will drop all of his Rings, causing them to scatter across the screen. During this brief period, it is possible to recollect any scattered Rings before they disappear, thus as long as Sonic can keep collecting, he will not die (although this does not apply to drowning, being crushed, falling into a pit or getting a Time Over).

Most Sonic action games use a system wherein getting hit causes the Ring count to drop to 0, however some games differ—provided the player has 40 or more Rings in Sonic Unleashed as only half will be lost when hit; a set loss of 10 Rings occurs in some games such as Sonic Blast and Shadow the Hedgehog; while Sonic the Hedgehog Triple Trouble has a set loss of 50 Rings from spike damage and 30 for other types of damage; and Tails loses varying numbers depending on the severity of the hit in Tails Adventures.

Collecting 50 Rings in the Sonic the Hedgehog causes a Giant Ring to appear at the end of the Act, in turn allowing Sonic to access the Special Stage (and a further 50 Rings in said stage grants Sonic a Continue). Most Sonic games since have used Rings to access either Special Stages or Bonus Stages, either mid-way through or at the end of a level.

Collecting 100 Rings in most Sonic games grants the current character an extra life. This is repeated for 200 Rings and 300 Rings (although not all games continue the pattern for 400, 500, 600 etc.). This system was first seen with the coins in Super Mario Bros., though was copied in Sonic and has appeared in most of his games since.

Rings also serve as fuel for characters' Super transformations. In the older games, one of the conditions for attaining Super Sonic was to collect 50 Rings and tap the jump button twice. Once in his golden form, Sonic's Ring count falls steadily, and he reverts to his normal blue self once it reaches zero. The decreasing Ring count is a general feature across many player-controlled super forms.

Starting with games such as Sonic R, where Rings can be exchanged for unlocking shortcuts, Rings have been used as a form of currency. This can also include unlocking new items or movesets. In games where Rings can be used to buy items, any Rings held at the end of a level are added to a reserve for the player to spend.

Rings functioned as slot-machine prizes as far back as Casino Night Zone in Sonic the Hedgehog 2.

Collected Rings can be used to pay for using special moves during gameplay, like Dr. Eggman's rocket attack in Sonic R, or the racer's signature moves in Sonic Drift 2. In Sonic Unleashed, collecting Rings fills up the Ring Energy gauge as well as the Ring count itself; Ring Energy powers the Sonic Boost move. Sonic Heroes also uses Rings to fill up a gauge, in this case the Team Blast gauge. Collecting Rings in Sonic Adventure 2's mech-shooting levels will slightly fill the health meter.

Rings are essential to perform the Light Speed Dash in games such as Sonic Adventure, however here the Rings are collected during the move (as Sonic travels down a line of Rings), rather than being a requirement before performing it. In some games, lines of Rings may be used repeatedly even after already being collected.

In both Chaotix and Sonic Advance 3, Eggman's Badniks would disgorge a Ring instead of an animal captive when destroyed. In the former case, the rings were Eggman's artificial Dark Rings, and not collectible, but in the latter case they were standard Rings. In Tails Adventures, Battle Kukku troops would sometimes drop Rings when defeated; carrying the Fang item on adventures would increase the chances of defeated Kukkus dropping Rings.

Chaotix featured a pair of very unusual Rings as a central gameplay element, which bound the player character and partner character together with an energy called "Ring Power". In Tails Skypatrol, the flying fox has a similar Ring which he uses to throw at enemies.

Tails and Rouge use fake Rings as an anti-robot explosive in Sonic Heroes. In Sonic the Hedgehog 2006, Tails uses an Item Box full of fake Rings.

Rings can also be used to unlock certain barriers which need Rings to open. Sometimes the player needs to have to pay the Rings in order to open these gates (such as in Sonic R), but in other games the player just needs to keep collecting Rings until the gate opens.

Description in the Sonic the Hedgehog Bible