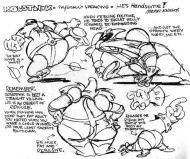 With the huge success of the Sonic the Hedgehog video games, animation studio DIC Enterprises, who had previously made video game based television series such as The Super Mario Bros. Super Show and Captain N: The Game Master, believed they could sell a Sonic animated series to one of the television networks in the USA. DIC approached Sega and made a deal with them, leading to the development of the Sonic the Hedgehog television series, which they then sold to the ABC network.

DIC then tried to convince ABC that it would be to their advantage to allow them to sell other episodes of Sonic the Hedgehog into syndication at the same time, a strategy DIC had previously employed with their hit show The Real Ghostbusters. However, ABC rejected this proposal for Sonic, telling DIC that if they planned to syndicate the show simultaneously, then the deal was off.[1] DIC's Robby London proposed an unprecedented solution, producing two very different Sonic series; the one that the network wanted for their Saturday morning lineup, which was darker and more serious, and one that was goofy, cartoony and gag-driven, which could be syndicated during the week. ABC agreed to this proposal and DIC began work on the syndicated show, Adventures of Sonic the Hedgehog.[2]

Though the two shows were made by the same animation house at the same time, production for the two remained separate entities. There was very little contact between either side, and the team behind Adventures never felt like they were in direct competition with the other show, as they both were doing vastly different things.[3] One notable moment where the two attempted to interact was when the writing team of Ben Hurst and Pat Allee of the Saturday morning show pitched an idea to the story editors of Adventures for an episode. Though what the episode could have been about has never been said, the outline was ultimately never used.

One key player recruited by DIC was cartoonist Milton Knight, a relative newcomer to the industry tasked with designing the characters and being in charge of storyboarding for many of the episodes. Though the appearances of Sonic and "Tails" were relatively close to how they are portrayed in DIC's Sonic the Hedgehog series, the character of Dr. Robotnik was heavily redesigned. Exaggerating features such as his weight, his mustache and being given a greater eye space to promote expressiveness, Milton Knight also gave a great deal of focus to the physical and emotional state of Robotnik. 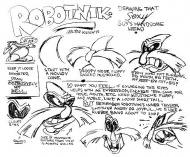 Transforming him into "Animation's Sexiest Fat Man!," Robotnik became just as important a focus in the show as the title character, Knight not wanting Robotnik to be a stale, generic villain but an intriguing and (most importantly) funny character in his own right. Though initially voiced by Jim Cummings in the unaired pilot, Long John Baldry, a British crooner from the '60s and '70s was given the role once production for the show went underway, his expressive delivery matching the character's intent in the show.

One of the more memorable aspects of the show were the Sonic Says segments featured at the end of each episode. To help fulfill a quota of educational television on broadcast stations, these segments were planned from the beginning, an early form appearing in the original pilot animation. However, as other countries did not have the same laws over what needed to be broadcast, the segments were removed from their initial airings in the U.K., including releases on VHS. However, when the series was later re-aired years later, the segments were restored, and have been included on the DVD releases in the United Kingdom.

After the completion of the 65 episodes necessary to keep the show in syndicated rotation, production ceased. The characters and settings were revisited when a Christmas special was commissioned in 1996. Featuring a cameo by a pink-hued Princess Sally, the special was originally meant to be titled An X-Tremely Sonic Christmas to tie in with the upcoming Sega Saturn game Sonic X-treme. In the wake of that game's cancellation, it was renamed Sonic Christmas Blast to tie-in with the game Sonic 3D: Flickies' Island, which was called Sonic 3D Blast in North America. 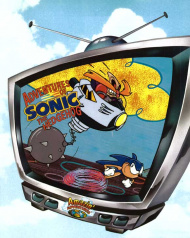 The show has also aired in Sweden on Filmnet and TV3, the Netherlands on Filmnet Plus and RTL4, Argentina on PakaPaka, Australia on Network Ten and ABC, France on France 3 and France 5, and in Greece, Germany, the Czech Republic and Russia, still airing in many of those countries. In Germany, the title of show was called Sonic der irre Igel, literally translating into Sonic the Insane Hedgehog. The series also has a home on YTV in Canada. The show also found it way to the Middle East and North Africa, airing on Spacetoon Arabic.

In Portugal it originally aired on RTP (RTP 1) in 1993, subtitled in Portuguese and in 1994 on SIC, this time dubbed in Portuguese, by Vila Nova de Gaia[6] (Oporto, Portugal) based company, Somnorte - Estúdios de Som, S.A.[7][8] (founded in 1991). It was released in VHS, in 1993 and 1994 by Prisvideo (Ecofilmes's sister company) under RTC's license (Rádio Televisão Comercial, a division of RTP founded in 1983 and extinct in 1996, which acted as a distributor, publisher and publicity controller for the parent company). For some of the initial VHS releases it was used the RTP version, subtitled in Portuguese and for the rest of the releases, the SIC version was choosed which is dubbed in Portuguese. Prisvideo re-released the show in DVD in 2006, also dubbed in Portuguese but this time the dubbing was made by another Portuguese company, also from Vila Nova de Gaia[6], namely, Cinemágica - Sociedade de Serviços Audiovisuais, Lda (founded in 1997, and currently active).

In Albania, Iriqi Sonik aired in 2010s on Bang Bang and later on Çufo.