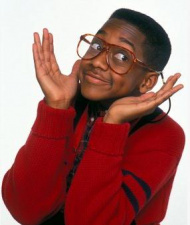 Jaleel White as Steve Urkel, circa 1990.

Jaleel White (b. November 27, 1976 in Pasadena, California) is an American actor who starred as Steve Urkel on the television series Family Matters from 1990 to 1998.

He created the role of Urkel, as he was called, and soon became a favorite television character during the run of the series. Unfortunately, the character was so tightly defined around White's appearance and performance that it became hard for him to get other roles after the show's run completed.

In 1999 a pilot called "Grown Ups" was based around White as a young man striking out into adulthood. The pilot featured another child actor, Soleil Moon Frye, as the girl whom he chose as a roommate. Frye was removed from the series after the pilot. The show was picked up for a full season and some episodes were broadcast, but the show was cancelled before the season was completed.

Jaleel was also the voice of the famed video game character Sonic the Hedgehog in three television series - Adventures of Sonic the Hedgehog, Sonic the Hedgehog, and Sonic Underground. It was announced in late October 2010 that he will be reprising his role as the voice of Sonic in Eddie Lebron's upcoming fan film, "Sonic". The tech demo of the fan film was released online January 10th, 2013.[1] Only 20 minutes of the film were completed and there were a few incomplete special effects. No plans for a full fan film have been announced.

White also made a cameo appearance in the movie Big Fat Liar and was the voice of 'Martin' in Our Friend, Martin.