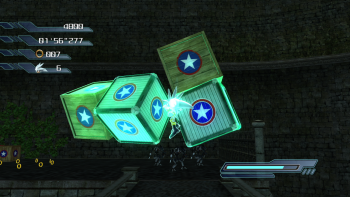 Using the power of his mind, Silver is able to manipulate objects remotely, allowing him to pick up obstacles, snatch incoming projectiles out of the air, and even levitate himself for short periods. While gripped by psychokinesis, the objects are shrouded in a distinctive turquoise aura.

Silver's psychic powers can also be used to stun and confuse his opponents. In Sonic Rivals 2, the move "ESP"Media:SonicRivals2 PSP US manual.pdf[3] scrambles the other player's controls, while in 06 Silver can slam the ground with psychokinesis to temporarily paralyse enemies in close range. While paralysed, the enemies can be scooped up with standard psychokinesis and hurled at their unsuspecting bretheren.

In Sonic '06, Silver's psychokinesis is limited by an energy bar on the HUD, which depletes each time the power is used. Much like Shadow's Chaos Control in the same game, Silver's energy is replenished by collecting Light cores from Eggman's robots or Iblis monsters. In Rivals 2, during Frontier Canyon Zone, Silver tells Espio that prolonged use of psychokinesis exhausts him, and he needs Rings to recharge.